Mount Wrightson is a 9,456-foot (2,882 m) peak in the Santa Rita Mountains within the Coronado National Forest, in southern Arizona, United States.

It was named for William Wrightson, a miner and entrepreneur in the region killed by Apaches in the 1865 Battle of Fort Buchanan.

Mt. Wrightson is the highest point in the Santa Rita Mountains and the Tucson region, lying 40 miles (64 km) southeast of the city. Its distinctive pyramid-shaped profile is visible from much of southeastern Arizona and adjoining areas in Sonora, Mexico.

Fauna on Mt. Wrightson include birds such as the scrub jay and ravens high up near the peak, Coues white-tailed deer, black bear, and (rarely) mountain lion.

Mount Wrightson viewed from the south, at one of the main saddles. 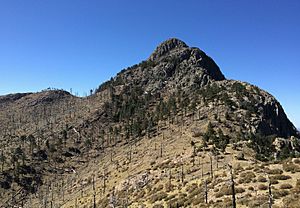 Looking up, close to the summit of Wrightson (April 2016).

The shortest route is the Old Baldy Trail, a steady climb of over 4,000 feet (1,200 m) over 5.4 miles (8.7 km) to the exposed summit. The Super Trail, also from the Madera Canyon trailhead, is not as steep but is far longer at 8.1 miles (13.0 km). These two trails intersect at Josephine Saddle (7,080 feet, 2,160 m) halfway to the peak, so hikers can choose one route for the lower path and one route for the upper. To reach the trailhead, take exit 63 off of I-19 south of Tucson, and turn east toward Continental. Turn right on Whitehouse Cyn. Rd, following it until it eventually turns into Madera Canyon Road. Parking is plentiful at and below the trailhead, which is at the end of the road.

There are several springs at different locations, including Bog Spring, Sprung Spring, Kent Spring, Armour Spring, Baldy Spring, McBeth Spring and Bellows Spring. Nonetheless, take plenty of water and be aware of wildlife. It is a prime birding area and black bears are common. Two miles into the hike is a saddle which offers an easy dayhike with dramatic views of this peak. It features a Boy Scout Memorial dedicated and maintained for three scouts who died in a storm on Mt. Wrightson November 15, 1958. According to the sign, the plaque was erected by Boy Scout Troop 249 in remembrance of David Greenberg (age 12), Mike Early (age 16), and Michael J. Lanoue (age 13).

The final approach to the summit is north facing and may be impassable without special equipment during the winter due to ice.

The "Florida Fire" in 2005 burned a large expanse of the forest in this area, affecting much of this hike, especially the section between the Walker Basin trail and the Super Trail.

All content from Kiddle encyclopedia articles (including the article images and facts) can be freely used under Attribution-ShareAlike license, unless stated otherwise. Cite this article:
Mount Wrightson Facts for Kids. Kiddle Encyclopedia.