Mountain Ash (Welsh: Aberpennar) is a town and community in the Cynon Valley, within the County Borough of Rhondda Cynon Taf, Wales.

At the 2001 census, Mountain Ash had a population of 29,000 increasing to 7,374 at the 2011 Census. The Mountain Ash geographical area incorporates and includes the districts and villages of Cefnpennar, Cwmpennar, Caegarw, Darranlas, Fernhill, Glenboi and Newtown. Mountain Ash lies within the historic county boundaries of Glamorgan.

The town lies around 4.5 miles south of the town of Aberdare, around a mile north of the village and community of Penrhiwceiber, and approximately 19 miles northwest of Cardiff.

From an administrative point of view, Mountain Ash is split into two electoral wards; 'Mountain Ash West' takes into account the town centre, together with the districts of Darranlas, Fernhill and Glenboi; 'Mountain Ash East' meanwhile comprises the remaining districts of Cefnpennar, Cwmpennar, Caegarw and Newtown.

Unlike other villages in the South Wales Valleys, it remained quiet, being only disturbed in 1818 by the construction of the Aberdare Canal. It became disused in the early 19th century, filled in to form the New Cardiff Road in 1933.

The population of the village was 1,614 in 1841, rising to 11,463 in 1871 with the opening of local collieries. The 1851 census shows the construction of Duffryn Street and Navigation Street. By 1859 there were 12 public houses, some of the earliest being the Bruce Arms, the Junction Inn and the New Inn. By 1920, Kelly's Directory lists over 200 businesses within the village.

The coal industry had started to decline post the First World War, but after the Second World War factory industries were introduced to offset the serious fall in local mining employment. By the end of the 20th century the last coal mines had closed, and many of the town’s factories had ceased operation as well. New light industries and service activities only partly mitigated the resulting economic hardship.

Mountain Ash along with the rest of the Cynon Valley and all the other South Wales Valleys was predominantly a Welsh speaking valley up until the 19th century. 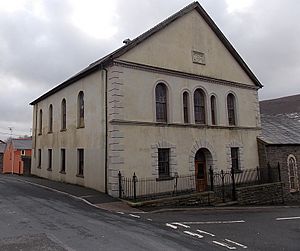 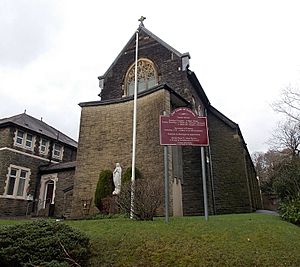 The Roman Catholic church of Our Lady of Lourdes

There were numerous nonconformist chapels at Mountain Ash. Of the Welsh language chapels only Bethania (Independent) remains open today. Bethlehem (Calvinistic Methodist) had closed. There was another Independent chapel at Bethel, Miskin.

Like other communities in the Cynon Valley, Mountain Ash was affected by the Religious Revival of 1904-05. One of the most striking events took place on a Friday evening in late January when a procession paraded through the main streets of the town before a revivalist meeting was held at Bethania Chapel addressed by the Rev Penar Griffiths.

Bus services are operated by Stagecoach in South Wales. 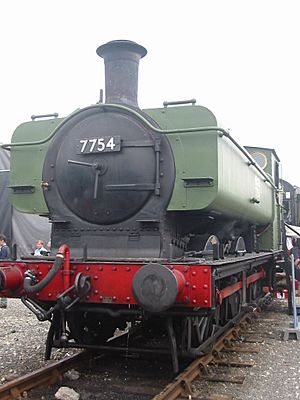 The ex-GWR Pannier Tank No.7754, in preservation at the Llangollen Railway. Through operating on the NCB Mountain Ash railway, it became the last British mainline-built operating steam locomotive in the UK, until it ceased operations in 1975

An early British railway line had developed from the industrial development within the South Wales Valleys, which with its core centred around Mountain Ash became known as the Mountain Ash Railway (MAR). Having developed from an early tramway, it became in the 1970s the last core of steam locomotive operations in the UK. Formally developed by Powell Duffryn as it consolidated various industrial assets, the railway started across from Afon Cynon at the Penrikyber Colliery, heading north past a coal stocking area at Pontcynon, then past the Mountain Ash inter change yard (known as the Lansdale Yard) and through the former Nixon's Navigation colliery - home of the railway's central workshops, locomotive sheds and weighbridge - and on north past Duffryn Colliery, terminating at the Abercwmboi Phurnacite plant. The railway's main access to the UK rail network was via the Vale of Neath Railway's station at Mountain Ash (Cardiff Road) railway station, although it also had access to the competing and dominant Taff Vale Railway. Early locomotives were drawn from all of the major UK industrial locomotive makers, but like many industrial railways post World War II the operational fleet were based around a core of group of Hunslet Austerity 0-6-0ST's. In 1959 the National Coal Board (NCB) acquired ex-GWR Pannier Tank No.7754. Although rather too heavy to work on the relatively light-rail of the MAR - which was also poorly maintained, which resulted in regular spreading of the rails - after a refit in the late 1960s, it became a favourite with MAR crews. It eventually became the last British mainline-built operating steam locomotive in the UK, until it ceased operations in 1975 following a cylinder valve crack. The NCB were persuaded to donate the locomotive to National Museum Wales, who have since loaned it indefinitely to the Llangollen Railway. The MAR closed in the mid-1980s, post the Miners Strike. 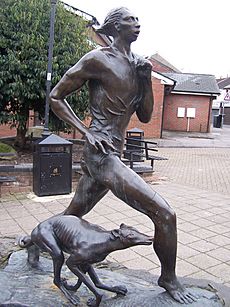 In 1974, Mountain Ash RFC Singers Male voice choir were formed from a group of ex-players.

Mountain Ash hosted the National Eisteddfod in both 1905 and 1946.

Mountain Ash served as the inspiration for the fictional town of Aberowen in Fall of Giants and the rest of the Century Trilogy written by Ken Follett.

All content from Kiddle encyclopedia articles (including the article images and facts) can be freely used under Attribution-ShareAlike license, unless stated otherwise. Cite this article:
Mountain Ash, Rhondda Cynon Taf Facts for Kids. Kiddle Encyclopedia.