Kenneth Martin Follett (born 5 June 1949) is a Welsh author of thrillers and historical novels who has sold more than 160 million copies of his works. Many of his books have achieved high ranking on best seller lists. For example, in the USA, many reached the number 1 position on the New York Times Best Seller list, including Edge of Eternity, Fall of Giants, A Dangerous Fortune, The Key to Rebecca, Lie Down with Lions, Triple, Winter of the World, and World Without End.

Follett was born on 5 June 1949 in Cardiff, Wales. Barred from watching films and television by his Plymouth Brethren parents, he developed an early interest in reading but remained an indifferent student until he entered his teens. His family moved to London when he was ten years old, and he began applying himself to his studies at Harrow Weald Grammar School and Poole Technical College.

He won admission in 1967 to University College London, where he studied philosophy and became involved in centre-left politics. He married Mary, in 1968, and their son was born in the same year. After graduation in the autumn of 1970, Follett took a three-month post-graduate course in journalism and went to work as a trainee reporter in Cardiff on the South Wales Echo. In 1973 a daughter, Marie-Claire, was born. 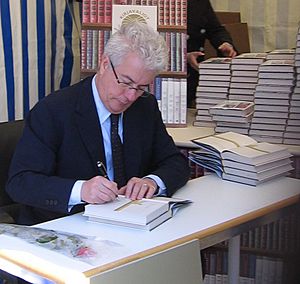 After three years in Cardiff, he returned to London as a general-assignment reporter for the Evening News. Finding the work not challenging, he eventually left journalism for publishing and became, by the late 1970s, deputy managing director of the small London publisher Everest Books. He also began writing fiction during evenings and weekends as a hobby.

Later, he said he began writing books when he needed extra money to fix his car, and the publisher's advance that had been paid for a thriller was the sum required for the repairs. Success came gradually at first, but the 1978 publication of Eye of the Needle, which became an international bestseller and sold over 10 million copies, made him both wealthy and internationally famous.

All content from Kiddle encyclopedia articles (including the article images and facts) can be freely used under Attribution-ShareAlike license, unless stated otherwise. Cite this article:
Ken Follett Facts for Kids. Kiddle Encyclopedia.