Eucalyptus deanei, commonly known as mountain blue gum, round-leaved gum, or Deane's gum, is a species of large tree endemic to New South Wales. It has smooth bark, lance-shaped leaves that are paler on the lower surface, flower buds in groups of seven to eleven, white flowers and cup-shaped to bell-shaped fruit. 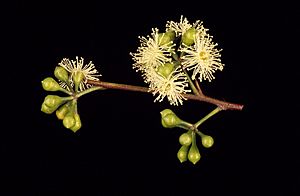 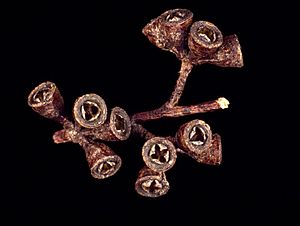 Mountain blue gum was first formally described in 1899 by Henry Deane and Joseph Maiden who gave it the name Eucalyptus saligna var. parviflora and published the description in Proceedings of the Linnean Society of New South Wales. In 1904, Deane raised the variety to species status as E. deanei and published the change in Proceedings of the Linnean Society of New South Wales. Maiden named the tree "in honour of my old friend Henry Deane, M.A., M.Inst.C.E., Engineer-inChief for Railway Construction of this State, my coadjutor in much work on the genus published in these Proceedings and whose stimulus and counsel in botanical work I have enjoyed for twenty years". He also noted that Maiden had drawn his attention to the tree "in March, 1888, at The Valley, Blue Mountains".

This eucalypt has been classified in the subgenus Symphyomyrtus, Section Latoangulatae, Series Transversae (eastern blue gums) by Ian Brooker and David Kleinig. Its two closest relatives are the flooded gum (E. grandis) and the Sydney blue gum (E. saligna). Its common name is derived from its roundish juvenile leaves, which also distinguish it from its closest relatives.

In 1990 Lawrie Johnson and Ken Hill described the New England population as a separate species, E. brunnea from a specimen collected near Torrington but the change is not accepted by the Australian Plant Census nor by the World Checklist of Selected Plant Families.

Eucalyptus deanei is found in two disjunct populations. The southern range is from Thirlmere to Broke, near Singleton, while the northern range is from Armidale on the Northern Tablelands through to the D'aguilar Range west of Brisbane. It is a dominant tree of tall forests in sheltered valleys where there is plenty of moisture, on clay or loam soils, and alluvial sands, although it sometimes grows on more elevated areas. They are most famously seen at the Blue Gum Forest in the Grose Valley within the Blue Mountains National Park.

The botanist Ken Hill collected this species mid way between the northern and southern populations, west of Comboyne. 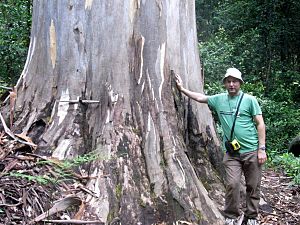 Base of 71 metre specimen at Woodford

Located near Woodford in the Blue Mountains, the largest known was measured in 1978 at 78 metres tall, and remeasured in 2010 at 71 metres tall with a diameter at breast height of 2.5 metres. Another large tree measures 65 m high with a 6 m diameter trunk in the Blue Gum Forest in the Grose Valley near Blackheath. Over 600 years old, it is a local landmark for bushwalkers.

All content from Kiddle encyclopedia articles (including the article images and facts) can be freely used under Attribution-ShareAlike license, unless stated otherwise. Cite this article:
Mountain blue gum Facts for Kids. Kiddle Encyclopedia.