Mullyash Kerbed Cairn is located at the peak of Mullyash Mountain, 7.5 km (4.7 mi) northeast of Carrickmacross, near the border. 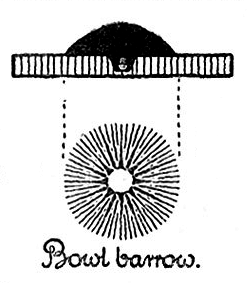 Cross-section of a typical bowl barrow

The cairn dates back to the early Neolithic, c. 4000 BC. The cairn was visible from all parts of the surrounding countryside (at least until the view was blocked by modern tree-planting). From Mullyash one could see as far as Slieve Gullion, Loughcrew, the Mourne Mountains and Cooley Mountains.

Until modern times, the cairn was visited by locals on the last Sunday in July (Crom Dubh's Sunday), a remnant of the Celtic festival of Lughnasadh. Celebrants climbed from the southwest, danced and celebrated at the cairn, and walked down to the west to a standing stone. Mullyash was renowned for matchmaking.

Local legend connected the cairn with the urn burial of a nobleman's daughter. Her father murdered her after she eloped with a young prince of whom he did not approve. If mortals eat certain foods they can see the gold treasure buried with her; perhaps a remnant of ancient shamanic rituals. Another legend claims that Fionn mac Cumhaill threw a stone from Slieve Gullion to Mullyash (a distance of 16.6 km / 10.3 mi), and this is the standing stone that still is there.

Mullyash Kerbed Cairn is a stepped two-tiered kerbed cairn or bowl barrow, or possibly a kind of passage grave. The walls are revetted and the cairn is about 16 m (52 ft) in diameter and 1.85 m (6 ft 1 in) high.

All content from Kiddle encyclopedia articles (including the article images and facts) can be freely used under Attribution-ShareAlike license, unless stated otherwise. Cite this article:
Mullyash Kerbed Cairn Facts for Kids. Kiddle Encyclopedia.