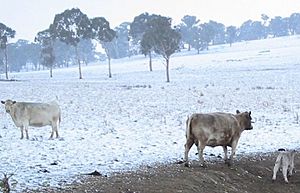 Murray Grey cows and a calf in snow, Walcha NSW 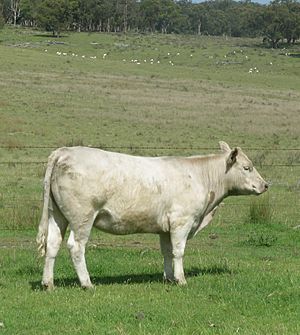 Murray Grey is a breed of Australian polled beef cattle that was developed in the upper Murray River valley on the New South Wales-Victoria border.

The Murray Grey breed was developed from an initial chance mating of a black Aberdeen Angus bull and a roan Shorthorn cow in 1905 during the Federation drought. The resulting 13 dun-grey calves from these matings were kept as curiosities and then bred on the Thologolong property along the Murray River in New South Wales by Peter and Ena Sutherland.

These are unusually coloured as they are black, cattle grew quickly, were good converters of feed and produced quality carcases. Local cattlemen soon became interested in the greys and began breeding them. The first larger-scale commercial herds were established in the 1940s. In the 1960s, several grey cattle breeders were selling them as a commercial enterprise and the Murray Grey Beef Cattle Society was formed to register the cattle and to administer the breed. Murray Grey registries are in Canada, New Zealand, the United Kingdom, and the United States. In New Zealand, Murray Greys have been favoured because of their resistance to facial eczema, which is a problem in other cattle breeds.

In 1963, negotiations were made to have the similar Tasmanian Grey beef cattle accepted into the Murray Grey, but the two organizations did not combine until 1981.

On 11 January 2011, a Murray Grey cow was swept 95 km by flood waters that raced through a property owned by Veronica Nutley, at Patrick Estate, near Lowood in the Brisbane Valley. The cow was found alive, 3 days later, in Moreton Bay, and was towed through mangroves to shore. She was identified by her National Livestock Identification System ear tag and returned to her owner. 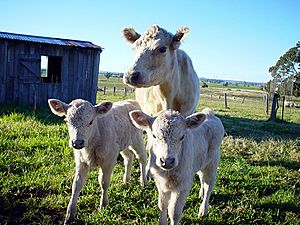 Hair colour ranges from very light silver to chocolate or dark grey; a few animals are even black, but most are silver to a silvery-dun color. This colouring is very dominant, so when crossed with another breed, the colour is grey or silver (light grey). Their skin has a dark pigmentation, which helps prevent cancer eye (ocular squamous cell carcinoma), photosensitivity reactions, and sunburned udders. They have performed well in snow country and in a trial undertaken at a commercial feedlot between December 2002 and June 2003 to determine the effect of high heat load on performance and carcase characteristics when fed a high-energy diet for 165–183 days. In this heat stress trial, they outperformed the other trialled breeds by producing the highest average daily weight gains over this period. Their superior performance in this trial was attributed to their lighter-coloured coats.

In 1967, three carcases were shipped from Australia to the Smithfield Show in the UK, where they finished first, second, and third in the Commonwealth carcase competition. In Australia, Murray Greys have dominated hoof and carcase competitions for many years.

The Murray Grey breed was the largest represented breed at the 2008 Calgary Stampede Carcase Competition. A Murray Grey steer was declared the Grand Champion Carcase there for the second consecutive year.

Murray Grey cattle, embryos, and semen have been exported to Canada, New Zealand, South America, the United Kingdom, and the United States. Murray Grey cattle have also been accepted into the South African Registrar of Livestock Improvement’s books. In Paraguay, Murray Grey cattle have been used in crossbreeding programs involving Zebu and Charolais cattle. The Zebu and Charolais cattle there lacked the dark skins and early-maturing traits of the Murray Greys. This crossbreeding program improved the fertility, calving ease, and weight gains of the progeny produced there.

All content from Kiddle encyclopedia articles (including the article images and facts) can be freely used under Attribution-ShareAlike license, unless stated otherwise. Cite this article:
Murray Grey cattle Facts for Kids. Kiddle Encyclopedia.