The musado is a modern martial art which is divided into two branches: the traditional musado destined for civil persons and the Musado MCS (Military Combat System) destined for the army and the police. The term musado (from Korean language) means "the way of warrior". Nevertheless, the musado is a German martial art, based on the Korean arts.

The international centre of the musado is in Dortmund. 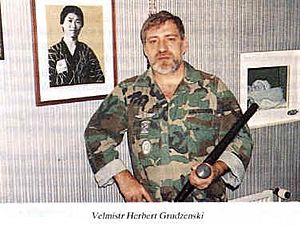 The grand master of the musado is Herbert Grudzenski (1947-September 20, 2012) from Germany, the main instructors for the Czech Republic are Oldřich Šelenberk and Antonín Sokol.

The traditional musado derives from Korean traditional martial arts such as taekwondo, hapkido & Kuk Sool Won. Many of the techniques tailored more for European physical capabilities while maintaining the Korean martial arts mindset though Grudzenski himself was also a black belt in Judo & Jujitsu.

The beginning of the musado is dated as from 1968.

Technical levels in the traditional musado

The traditional musado has 6 levels (1.-6. kup) of student which are marked by colour (see the table). Differently from the majority of the martial arts the student does not have a belt since the beginning. Only to the term of the course which lasts 2–4 months there is capacity to pass examination for the white belt.

The belts go up until ninth dan, dan is marked on the belt with Roman numeration written with golden letters. In the Czech Republic, the most graduated is Antonín Sokol (4. dan).

Code of honour of the practitioners of musado

The code of honour is a modern version of the code of ancient Korean units Hwarang.

After taking oath the student must adhere to these moral and ethical principles (kyohun; Korean terms):

The Musado MCS is a military system of personal defence and of body-to-body combat, designed especially for training of the army, of the police and of other forces of security.

In the army of the Czech Republic this system was introduced in 1993.

Musado MCS does not have any rules precisely given. However, with its vast extension it provides more than 4000 techniques and skills which with good mastery enable the warrior to stop an attack.

All content from Kiddle encyclopedia articles (including the article images and facts) can be freely used under Attribution-ShareAlike license, unless stated otherwise. Cite this article:
Musado Facts for Kids. Kiddle Encyclopedia.