My Fair Lady is a 1964 movie. It is based on the 1957 stage musical My Fair Lady by Lerner and Lowe. The musical and movie are based on the movie adaptation of the stage play Pygmalion by George Bernard Shaw. The movie was directed by George Cukor. It stars Rex Harrison and Audrey Hepburn. The story is about phonetics professor Henry Higgins. He wagers that he can turn flower girl Eliza Doolittle (Audrey Hepburn) into a proper English high society lady. The movie won eight Academy Awards, including Best Picture, Best Actor (Harrison), and Best Director.

Julie Andrews was the original Eliza in the stage musical. Audrey Hepburn was cast as the movie Eliza because studio head Jack Warner wanted "a star with a great deal of name recognition". Julie Andrews did not have any movie experience. He thought a movie with her would not be as successful as a movie with Hepburn. Andrews went on to star in Disney's Mary Poppins that same year. She won the Best Actress Academy Award over Hepburn. 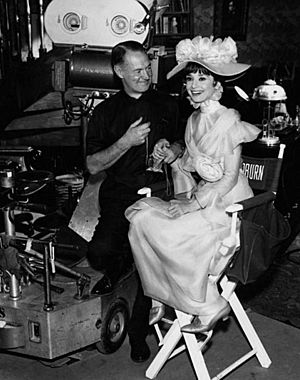 All content from Kiddle encyclopedia articles (including the article images and facts) can be freely used under Attribution-ShareAlike license, unless stated otherwise. Cite this article:
My Fair Lady (movie) Facts for Kids. Kiddle Encyclopedia.