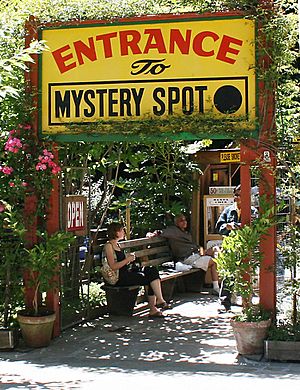 The Mystery Spot is a tourist attraction near Santa Cruz, California, opened in 1939 by George Prather. Visitors experience demonstrations that appear to defy gravity, on the short but steep uphill walk and inside a wooden building on the site. The Mystery Spot is a popular tourist attraction, and gained recognition as a roadside "gravity box" or "tilted house". The site is what is known as a gravity hill and was the first of its kind to be built in California. 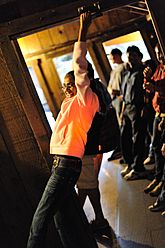 One of the many optical illusions at the Santa Cruz Mystery Spot.

Prather was inspired to open the site by the popularity of the Oregon Vortex, which opened to the public in 1930. According to a newspaper report, Prather bought three acres on the hill in 1940 after he felt slightly dizzy while walking and was interested in his dizziness. The newspaper also reported that during further exploration of his property he found his compass jittering. He built a "crazy house" and opened the site to the public in June 1941. Tour guides lead visitors through the attraction and perform various demonstrations to showcase the site's unusual effects.

Prather died in January 1946; his son Bruce inherited the land and continued running the Mystery Spot with his father's business partner Vaden McCray. The McCray family was photographed for the Life magazine spread on the Mystery Spot for their November 15, 1948 issue. McCray died in 2001; Bruce Prather died in 2015. An anonymous Santa Cruz lawyer now owns the property.

The site is located in Santa Cruz, California among the Santa Cruz mountains, Oak trees, Eucalyptus trees, near Granite Creek, and within the California Redwood forest. The Mystery Spot is home to a man-made dahlia garden along the hiking trail. 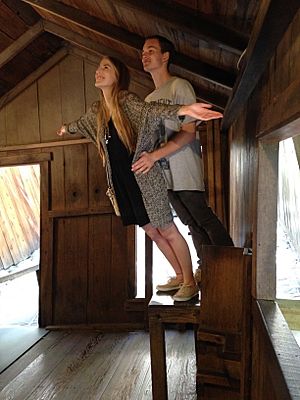 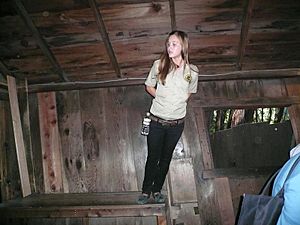 Guide leaning on top of table at The Mystery Spot

The Mystery Spot is a gravity hill, tilt-induced visual illusion. The illusion experienced by visitors results from the oddly tilted environment as well as standing on a tilted floor. Inside the tilted room of the Mystery Spot, misperceptions of the height and orientation of objects occur. Even when people are standing outside on a level ground, the slant of the building in the background causes misperceptions as humans judge the height of people using the slant of the roof rather than the true horizon.

These visual illusions include balls rolling uphill and people leaning farther than normally possible without falling down. Psychologists at Berkeley state that all of the misperceptions stem from the simple fact that the house is slanted at a 20 degree angle. Professor William Prinzmetal states, "When the perceiver's body also is tilted, the distorting impact on vision is greatly magnified- up to two or three times." Another point he makes is that distorted orientation causes other senses to fall back while one's visual senses become heightened. People standing at impossible angles and water flowing uphill are related to the angle at which the house sits.

Other suggestions have been proposed to explain the reason behind The Mystery Spot's odd gravitational rules and illusions. Tour guides suggest that "a meteor which fell in ancient days and left a magic circle" is the cause behind the mystery, and suggest that an electromagnetic field on the hill deters wildlife. These are theories proposed by guides for entertainment, and not scientific reasoning.

All content from Kiddle encyclopedia articles (including the article images and facts) can be freely used under Attribution-ShareAlike license, unless stated otherwise. Cite this article:
Mystery Spot Facts for Kids. Kiddle Encyclopedia.