Kids Encyclopedia Facts
In this article, the patronymic is Anatolyevna and the family name is Kosintseva.

Nadezhda Anatolyevna Kosintseva (Russian: Надежда Анатольевна Косинцева; born 14 January 1985) is a Russian chess grandmaster. She was a member of the gold medal-winning Russian team in the Women's Chess Olympiads of 2010 and 2012, and in the Women's European Team Chess Championships of 2007, 2009 and 2011.

In 2005, she tied for first place with Kateryna Lahno in the European Individual Women's Championship, held in Chișinău. Kosintseva took the silver medal after losing the playoff match. In the 2007 edition of the same event she won the bronze medal. 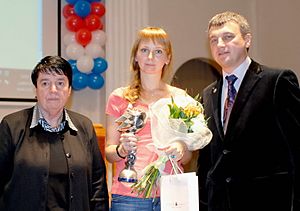 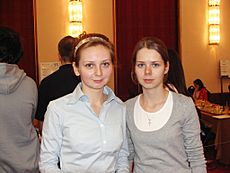 The holder and the winner of the honorary FIDE award of Caissa as the 2010 best female chess player. Chess Award of Caissa, designed and executed by artisans of the Lobortas Classic Jewelry House, was solemnly presented on September 18, 2010 within the framework of FIDE Women's Blitz World Championship in Moscow.

Kosintseva married Leonid Kritz in late December 2012 and a daughter was born in 2014.

In 2013, she moved to the United States to study at the University of Texas at Dallas.

All content from Kiddle encyclopedia articles (including the article images and facts) can be freely used under Attribution-ShareAlike license, unless stated otherwise. Cite this article:
Nadezhda Kosintseva Facts for Kids. Kiddle Encyclopedia.