Naim Süleymanoğlu (in Bulgaria forced to change as Naim Suleimanov (Bulgarian: Наим Сюлейманов), 23 January 1967 – 18 November 2017) was a Turkish World and Olympic Champion in weightlifting. In the 1988 Summer Olympics he set a record by lifting 190 kg in the clean and jerk. He was awarded the Olympic Order in 2001. 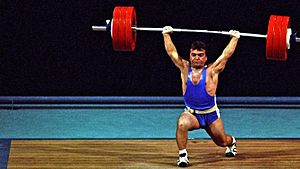 In 2000 and 2004 he was elected member of the International Weightlifting Federation Hall of Fame.

On 25 September 2017, he was hospitalized due to liver failure. On 6 October, he had liver transplantation was made when a liver donor was found. On 11 November a surgery was made due to a cerebral hemorrhage which led to cerebral edema. He died on 18 November 2017.

All content from Kiddle encyclopedia articles (including the article images and facts) can be freely used under Attribution-ShareAlike license, unless stated otherwise. Cite this article:
Naim Süleymanoğlu Facts for Kids. Kiddle Encyclopedia.