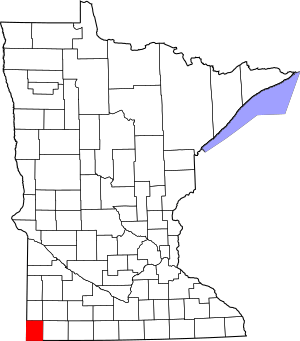 Location of Rock County in Minnesota

Rock County's National Register properties reflect its role as an agricultural region, served by a few population centers connected to eastern markets by railroads. The first and largest community, Luverne, was established in 1867 and platted in 1872, a later start to settlement than most other parts of Minnesota. Rail lines were constructed in the 1870s and 80s, directly influencing the placement of most of the rest of Rock County's towns.

The construction methods of Rock County's listings reveal the changing availability and fashion of building materials. The oldest structures were of wood framing. Increased investment is indicated by the use of brick, in such structures as the 1879 Pierce J. Kniss House and 1880 farmhouse at the Jacob Nuffer Farmstead. Then, from the 1890s to 1905, locally quarried Sioux Quartzite became briefly fashionable, but its extreme hardness soon quashed its appeal among builders.

All content from Kiddle encyclopedia articles (including the article images and facts) can be freely used under Attribution-ShareAlike license, unless stated otherwise. Cite this article:
National Register of Historic Places listings in Rock County, Minnesota Facts for Kids. Kiddle Encyclopedia.