Nelder Grove, formerly known as Fresno Grove when it was within a much larger 19th-century Fresno County, is a Giant sequoia grove located in the western Sierra Nevada within the Sierra National Forest, in Madera County, California.

The grove is a 1,540-acre (6.2 km2) tract containing over 100 mature Giant Sequoia (Sequoiadendron giganteum) trees. It also contains a number of sequoia stumps, remaining from when the grove's ancient trees were logged in the late 1870s to 1890s, before being protected by its United States Forest Service acquisition in 1928. A Sierra National Forest campground is located at the Nelder Grove.

In 2017, nearly half of the grove's mature sequoias were killed by the Railroad Fire.

Some of the trees and trails found in the grove that are worthy of special note are:

The area was logged extensively from 1878 until the mid-1890s by the Madera Flume and Trading Company. They logged mostly sugar pines, ponderosa pines, white firs, and incense-cedars, but they did cut down some of the sequoias as well.

The grove is named for John A. Nelder, who was called by John Muir the "Hermit of the Fresno Forest. Muir wrote about him and the area in 1878, and the description was later included in Chapter 9 of his book Our National Parks:

One of the first special things that caught my attention was an extensive landslip. The ground on the side of a stream had given way to a depth of about fifty feet [15 m] and with all its trees had been launched into the bottom of the stream ravine. Most of the trees—pines, firs, incense-cedar, and Sequoia—were still standing erect and uninjured, as if unconscious that anything out of the common had happened. Tracing the ravine alongside the avalanche, I saw many trees whose roots had been laid bare, and in one instance discovered a Sequoia about fifteen feet [5 m] in diameter growing above an old prostrate trunk that seemed to belong to a former generation.

This slip had occurred seven or eight years ago, and I was glad to find that not only were most of the Big Trees uninjured, but that many companies of hopeful seedlings and saplings were growing confidently on the fresh soil along the broken front of the avalanche. These young trees were already eight or ten feet [3 m] high, and were shooting up vigorously, as if sure of eternal life, though young pines, firs, and libocedrus were running a race with them for the sunshine with an even start.

Farther down the ravine I counted five hundred and thirty-six promising young Sequoias on a bed of rough bouldery soil not exceeding two acres [0.8 hectares] in extent.

Remnants of the area's logging days, including two restored cabins and replicas of cross-log and two-pole log chutes, are on display at the Nelder Grove interpretive center.

Shadow of the Giants 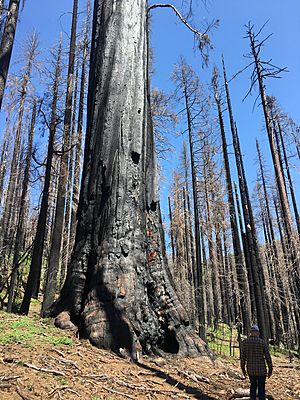 A mature giant sequoia snag in Nelder Grove, as seen in May 2019, charred by the Railroad Fire.

In September 2017, almost half of the 104 mature sequoias in Nelder Grove were killed by the Railroad Fire.

A variety of factors created wildfire behavior outside of what sequoias are adapted to, including the 2011–2017 California drought, the most extreme on historical record, which had contributed to extensive and unprecedented foliage dieback and other stress responses in giant sequoias. In addition, many decades of fire exclusion resulted in heavy surface fuel accumulation and significant understory vegetation that contributed to higher intensity burning.

The fire forced the closure of The Shadow of the Giants trail and impacted over 82 of the grove's mature sequoias.

All content from Kiddle encyclopedia articles (including the article images and facts) can be freely used under Attribution-ShareAlike license, unless stated otherwise. Cite this article:
Nelder Grove Facts for Kids. Kiddle Encyclopedia.