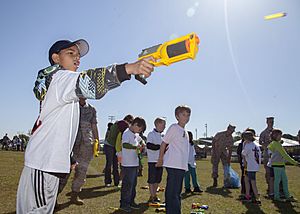 Nerf (written in capitals as NERF) is a brand of toy weapons. It is created by Parker Brothers and currently owned by Hasbro.

Most of the toys are a variety of foam-based weaponry.

While it is commonly known for its toy guns (or "blasters"), it can also be footballs and other types of sport utilities such as  Nerf skateboards, scooters and bikes. 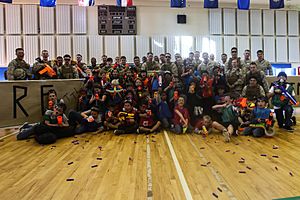 Shoot ‘em up, Marines, children duke it out in a Nerf battle 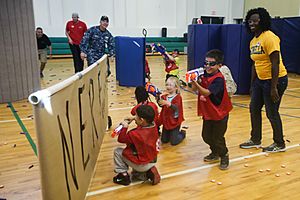 Kids having a Nerf gun battle

The Nerf Sports (or N-Sports) line is a wide range of foam balls that resemble real sports balls. They are designed with different color schemes and features, with some of their footballs featuring color schemes and logos of the NFL. In addition, the tail-fins characteristic of Nerf Sports' Vortex sub-line (not to be confused with the blaster sub-line of the same name) cause the foam footballs of which it is comprised to resemble torpedoes and fly greater distances. 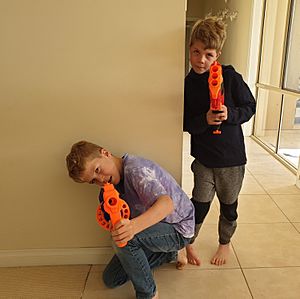 Nerf's most popular products are Nerf Blasters, which are toy plastic guns that shoot foam darts, which are, among other things: Velcro-tipped in order to stick to Nerf vests, tipped with suction cups designed to stick to smooth surfaces, streamlined to fit in magazines, some able to whistle in flight, or a color variation, such as camouflage, color swap, and glow in the dark. Most Nerf blasters have tactical rails that accommodate different attachments, but there are also some that attach through special adapters like barrel extensions and stocks. The main sub-line of Nerf blasters is N-Strike Elite, which was first launched in 2004 as “N-Strike” with a yellow color scheme and updated in 2012 as its current name, upgraded ranges, and a blue, orange and white color scheme. 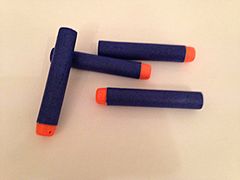 In September 2011, Hasbro introduced a third sub-line of Nerf blasters called Nerf Vortex. The line's blasters fire small green, bright orange or white glow-in-the-dark discs made of soft plastic covered in foam. Nerf re-released the series in May 2018, with the same projectiles in green and blue to match the new color schemes of the updated vigilon, praxis, and pyragon. The Vortex blasters have a firing range up to 60 feet.

The Nerf Modulus blaster line includes a number of accessories and accessory kits. The blasters are typically white, grey and green.

Rebelle is aimed at the female demographic, sporting pink, purple and teal colors.

In 2017, Hasbro released the Nerf Nitro line, which consists of Blasters that fire foam cars into obstacles and stunt ramps.

Nerf Rival blasters fire small foam balls referred to by Nerf as "High Impact Rounds", but usually referred to as “Rival Balls” by the nerfing community. Nerf Rival blasters are targeted towards an older target market than Nerf's better known dart blasters. Nerf Rival blasters come in three colors, white, red, and blue, and are engineered to fire further and more precisely than blasters featured in other Nerf lines. Within this series is a subseries called "Phantom Corps", which was first released in spring 2017. In Phantom Corps, the series has its own Nerf blasters, but also sports white reshells of some of the original red and blue blasters, which are altered slightly but are still recognizable as the originals. The Phantom Corps subline includes removable colored banners with the blasters so that the user can switch teams without having to buy a new blaster. A new series in 2019 will be the Nerf Rival Edge series, featuring a seemingly greater emphasis on the “bolt-action sniper” aesthetic and demographic.

In 2013, Hasbro released the Snake Eyes Blade of Justice for the film G.I. Joe: Retaliation. 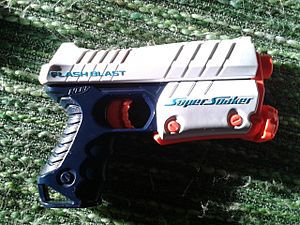 Originally owned and marketed by Larami, Super Soaker is a popular line of water guns. Recently, Hasbro has released a line of Nerf-branded Super Soaker blasters.

Lazer Tag, a popular laser tag toy line from the mid-1980s, is also currently part of the Nerf banner. The current generation of Lazer Tag blasters attach to iPhones or iPod Touch units for enhanced playability.

In June 2013, Hasbro and Grammercy Products unveiled Nerf Dog, a line of Nerf-inspired canine retrieving toys made of rubber, nylon and plastic. Nerf Dog was launched at Walmart stores, and debuted at pet specialty stores in Fall 2013.

Based in Secaucus, N.J., Gramercy Products, Inc. is the manufacturer of Nerf Dog products.

The Nerf Dog toy line launch included a long distance ball thrower that can propel a toy up to 250 feet and will feature extra tough Nylon construction and stitching that is three times as strong as traditional dog toys. The entire range will include toys made of rubber, nylon and Thermo Plastic Rubber (TPR) ranging from $5 to $15.

The Nerf Dog Tennis Ball Blaster mimics traditional Nerf gun designs and shoots a ball up to 50 feet in the air. The toy uses special softer balls to reduce the risk of injury.

All content from Kiddle encyclopedia articles (including the article images and facts) can be freely used under Attribution-ShareAlike license, unless stated otherwise. Cite this article:
NERF Facts for Kids. Kiddle Encyclopedia.