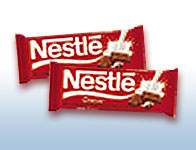 The original milk chocolate formula was invented in Vevey, Switzerland, in 1875 by Henri Nestle." According to Nestle, the bar was discontinued in 2016.

Nestlé Milk Chocolate was created as a competitor to the more-established, and North American chocolate bar segment-leader Hershey bar, and was even created in a similar form as their competitor. The closest Nestlé product to them is the Nestlé Crunch, which is very similar to Nestlé Milk Chocolate, the main difference being that Nestlè Crunch has puffed rice, while Nestlé Milk Chocolate does not. A similar product, Yorkie made by Nestlé, is not to be confused with Nestlé Milk Chocolate as it is a completely different product, as the Yorkie bar was originally created by British firm Rowntree of York to compete with Cadbury Dairy Milk. Nestlé also produces many other brands of chocolate/syrup.

All content from Kiddle encyclopedia articles (including the article images and facts) can be freely used under Attribution-ShareAlike license, unless stated otherwise. Cite this article:
Nestlé Milk Chocolate Facts for Kids. Kiddle Encyclopedia.