The New Britain Museum of American Art is an art museum in New Britain, Connecticut. Founded in 1903, it is the first museum in the country dedicated to American art.

Walnut Hill Park, designed by Frederick Law Olmsted, is next to the museum.

The museum's origins are in the "New Britain Institute", chartered in 1853 with the goal of fostering education and art in the city, especially among its immigrant population. In 1903, the museum received a bequest of $20,000 from John Butler Talcott to acquire "original modern oil paintings either by native or foreign artists". Talcott's nephew was tonalist Allen Butler Talcott of the Old Lyme Art Colony. Bryson Burroughs, then curator of paintings at the Metropolitan Museum of Art in New York City, suggested to museum officials that directing their efforts at acquiring American art would be most cost-effective. The museum took his advice and seldom spent more than $1,000 for any artwork, amassing a collection now worth millions.

A wealthy widow, Grace Judd Landers, expected to donate a large amount of money to the museum, but she lost her money in the stock market crash of 1929, and so donated her house as a museum in 1934.

Sanford B. D. Low, a son-in-law of William H. Hart, at one time president of New Britain's Stanley Works, was the museum's first director. He acquired a number of works by his friend, Thomas Hart Benton, for the museum. Both Low and Benton were part of a high-spirited circle of friends (including James Cagney) who spent summers at Hart Haven, William Hart's summer place on Martha's Vineyard where both Low and Benton painted together (Hart was no relation to Thomas Hart Benton). In the late 1940s, Low found out that the Whitney Museum in New York City was rumored to be ready to sell Benton's "The Arts of Life in America" series, which was out of fashion as representational art. Benton had believed he was cheated when he sold the murals to the Whitney's director, Juliana Force. Low arranged to have the New Britain museum acquire the works for $500, paid for by Alix Stanley, a member of the family which founded Stanley Works. The purchase price was less than it cost to hire a crane for the move and transport the pictures.

In 1964 the Sanford B. D. Low Memorial Illustration Collection was inaugurated. The first museum collection of American illustration in the United States, it now holds over 1,700 works dating from the 19th century.

Douglas Hyland became executive director of the museum in 1999 after having been director of the San Antonio Museum. He raised funds from new donors outside of New Britain, including the Walton Family Foundation and the Henry Luce Foundation. In 2003, the 43,000-square-foot (4,000 m2) Chase Family Building was constructed, doubling the museum's size. During Hyland's tenure (as of 2009), the New Britain museum building was renovated, and the museum doubled its collection to 10,000 objects, doubled its full-time staff to 24 employees, doubled its docents to 100 and nearly tripled memberships from 1,200 to 3,500.

The museum's $3.92 million in income for the fiscal year ending June 30, 2009, revenue was up slightly from the $3.86 million of the previous fiscal year. 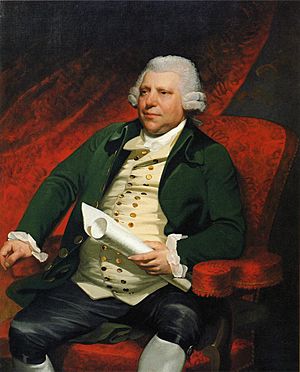 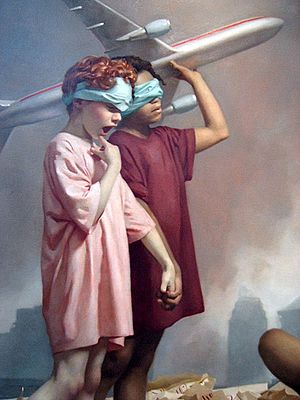 The Cycle of Terror and Tragedy (detail) by Graydon Parrish. Collection of the New Britain Museum of American Art

The collection also includes the mural series "The Arts of Life in America" by Thomas Hart Benton. The museum's contemporary art holdings include works by Chuck Close, Dan Flavin, Eva Hesse, Julie Heffernan, Walton Ford, Ronnie Landfield, and Graydon Parrish. Graydon Parrish's large realist painting The Cycle of Terror and Tragedy is also part of the collection. The painting is an allegorical tribute to those lost in the terrorist attacks of September 11, 2001.

The museum is the first to build a collection of Post-contemporary Art, centered around Parrish's 9/11 painting and including works by Tony Curanaj, Daniel Maidman, Richard T. Scott, Sadie Valerie, Stephanie Deshpande, and Patricia Watwood, among others.

All content from Kiddle encyclopedia articles (including the article images and facts) can be freely used under Attribution-ShareAlike license, unless stated otherwise. Cite this article:
New Britain Museum of American Art Facts for Kids. Kiddle Encyclopedia.