New Exchequer Dam is a concrete–faced, rock-fill dam on the Merced River in central California in the United States. It forms Lake McClure, which impounds the river for irrigation and hydroelectric power production and has a capacity of more than 1,000,000 acre feet (1.2 km3). The Merced Irrigation District (MID) operates the dam and was also responsible for its construction.

Built between 1964 and 1967, the dam replaced the old arch type Exchequer Dam and stands 490 feet (150 m) high. At the time of completion, it was the largest dam of its kind in the world. The dam is named for the town of Exchequer which now lies under the reservoir, while the reservoir is named for Wilbur F. McClure, the State Engineer of California during construction.

In 1926, after five years of planning and construction, MID completed the Exchequer or "Great Exchequer" Dam across the Merced River six miles (9.7 km) above the town of Merced Falls. The dam was a concrete gravity–arch structure 326 feet (99 m) high, holding a 14-mile (23 km) lake with a capacity of 281,000 acre feet (347,000,000 m3) of water. Although the dam was to serve primarily for irrigation, power production began ceremoniously on June 23, 1926 with a press of a telegraph key by President Calvin Coolidge, starting the turbines at a 31 megawatt hydroelectric plant.

By the 1950s, it became apparent that the limited storage capacity at Exchequer was no longer enough to serve the needs of farmers in the Merced River valley. A high dam was proposed to be built just downstream, creating a reservoir nearly four times the size of Exchequer.

Construction of New Exchequer Dam began on July 8, 1964, directly downstream from the old concrete arch dam. Tudor Engineering Company of San Francisco was responsible for the design of the new dam. The dam wall was constructed in vertical zones, which consisted of compacted, alternating layers of coarse and fine material ranging in thickness from 1.6 to 66 feet (0.49 to 20.12 m). The old Exchequer Dam was incorporated as an upstream toe to help support the rock-fill embankment, which was then armored with a layer of reinforced concrete. The dam was topped out in early 1967 and the power plant went into commercial operation by July.

As the new reservoir filled, it inundated an additional 15 miles (24 km) of the Merced River canyon and buried sections of the historic Yosemite Valley Railroad and the mining town of Bagby under 50 feet (15 m) of water. New Exchequer was among the first high concrete–faced rock-fill dams in the world, and its untested design resulted in significant leakage, sometimes up to 100 cubic feet per second (2.8 m3/s). MID began to repair the leaks in the fall of 1985 under orders from the California Division of Safety of Dams. 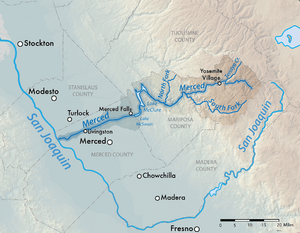 Map of the Merced River watershed, including location of Lake McClure

MID has proposed raising the spillway gates of the dam, which would provide up to 70,000 acre⋅ft (0.086 km3) of additional storage. However, this has met with controversy because it would result in part-time flooding of a portion of the Merced River designated Wild and Scenic. Opponents also point out that the raise is unnecessary, since the reservoir has never overflowed due to flooding since its completion in the mid-1960s.

Lake McClure is also extensively developed for recreational activities, with 515 campsites, four boat ramps and two marinas. In 1992, the lake received 606,000 visitor-days, mostly from May to September.

All content from Kiddle encyclopedia articles (including the article images and facts) can be freely used under Attribution-ShareAlike license, unless stated otherwise. Cite this article:
New Exchequer Dam Facts for Kids. Kiddle Encyclopedia.