New Lambton is a suburb of Newcastle, in the Hunter Region of New South Wales, Australia. It is located about 6 km (4 mi) west of the Newcastle CBD. It includes two shopping districts, schools and other general facilities. At the 2016 Australian census it had a population of approximately 10,000.

Initially a coal mining township, New Lambton later became a municipality until it was eventually incorporated into Greater Newcastle. The suburb, which is primarily residential, includes a 182 ha (450-acre) nature reserve and a major regional sports centre.

New Lambton was originally a coal mining township, with the New Lambton Colliery situated to the east across the railway in what is now Adamstown.

In 1901 New Lambton had a population of 1,464. The Municipal Council consisted of the following:

The council derived a considerable revenue from the district's largest mine, the Scottish-Australian Coal Mining Company's Lambton Colliery, managed by the three Croudace brothers, Frank, Thomas, & Sydney, which although closer to Lambton fell within the New Lambton municipality. One of the district's principal thoroughfares today is Croudace Street.

The town was free of debt, and had a telegraph office, Council Chambers (erected at a cost of £550), the New Lambton Mechanics Institute, a reading room, fire brigade, public school, good streets and "many signs of advancement". The Member for Kahibah in the New South Wales Legislative Assembly, including New Lambton, was Alfred Edden.

In 1938 an Act of the New South Wales Parliament created the "City of Greater Newcastle", which incorporated eleven municipalities, including New Lambton, into one local government area.

During World War II, New Lambton Public School was requestioned by the government and used as No. 2 Fighter Sector Headquarters. In recognition of this, the school was granted permission in 1995 to fly the Royal Australian Air Force Ensign and is the only school in Australia allowed to do so.

New Lambton is bordered by, or crossed by various arterial roads. Lookout Road, which joins Croudace Road, borders the suburb to the west. To the east, Lambton Road facilitates access to the Newcastle CBD. To the south, Carnley Avenue and Northcott Drive provide access to the City of Lake Macquarie suburbs. The south-east of the suburb is bordered by the Main Northern Railway, where the suburb is serviced by Adamstown railway station. 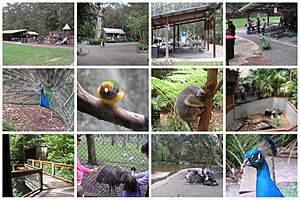 The entire south-western corner of the suburb is occupied by Blackbutt Reserve. The main entrances of the reserve, in Carnley Avenue and Freyburg Street, are approximately 8.8 km (5.5 mi) by road from the Newcastle CBD. Covering 182 hectares (450 acres), the reserve is mainly urban bushland, and includes nature trails, wildlife exhibits, children’s playgrounds and recreational facilities. The reserve, which is administered by the Newcastle City Council, has over 16 km (10 mi) of tracks meandering through open rainforest.

There are four main picnic and recreational areas in the reserve, off different entry points: 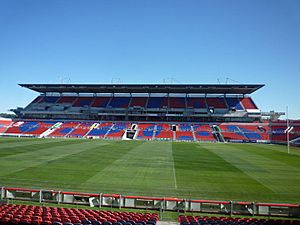 New Lambton includes several parks where various sports are played. At the north-eastern corner of the suburb, is the Newcastle International Sports Centre, a venue used by the National Rugby League's Newcastle Knights and the A-League's Newcastle Jets. The suburb is also home to the New Lambton Football Club, the largest football club based on members in Northern NSW and they play games out of Alder Park and Novocastrian Park. New Lambton Football Club traces its origins back to 1896 when Scottish Miners from South Lambton first played football, which became an official club in 1917 as returned servicemen came home from the Great War to again work in the mines. Western Suburbs Rugby League and Cricket Club call Harker Oval home.

All content from Kiddle encyclopedia articles (including the article images and facts) can be freely used under Attribution-ShareAlike license, unless stated otherwise. Cite this article:
New Lambton, New South Wales Facts for Kids. Kiddle Encyclopedia.