New York Mills is a city in Otter Tail County, Minnesota, United States. The population was 1,199 at the 2010 census. 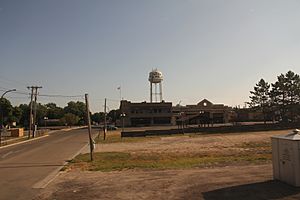 New York Mills was platted in 1883. The city was originally built up chiefly by Finns.

According to the United States Census Bureau, the city has a total area of 1.30 square miles (3.37 km2), all of it land.

There were 533 households, of which 27.4% had children under the age of 18 living with them, 39.4% were married couples living together, 10.7% had a female householder with no husband present, 3.8% had a male householder with no wife present, and 46.2% were non-families. 40.0% of all households were made up of individuals, and 22.1% had someone living alone who was 65 years of age or older. The average household size was 2.12 and the average family size was 2.84.

The city of New York Mills was founded in 1884 by Finnish immigrants. Major industries include agriculture (row crops, grain and dairy farming), Lund Boat Company fishing boat manufacturers, and a variety of service professions. Located in Otter Tail County, which contains 1,048 of the state's lakes, tourism is an increasingly important economic factor in the area. 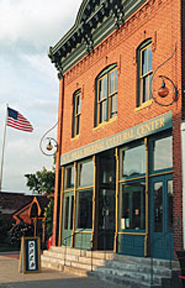 Faced with the economic challenges and decreasing population of many rural communities, New York Mills decided to invest in a Regional Arts Center in an attempt to bring tourism to the area. In 1991 the city contributed $35,000 to the Regional Arts Retreat and Cultural Center to convert a downtown mercantile building into a multi-use arts and cultural facility. As a per-capita investment, this expenditure would be the equivalent of Minneapolis giving $13.7 million to an arts facility. The center, remodeled through a community-wide volunteer effort, opened its doors in June, 1992, as a non-profit Arts organization founded by John Davis. Further renovations include a new hardwood maple floor in the main gallery and an outdoor deck completed in 2005. While other communities withered in the face of declining populations and deteriorating main streets, New York Mills has remained stable economically, while the Cultural Center continues to draw people, activity, revenue and national attention to the community.

"The NYMRCC is dedicated to expanding the cultural and creative opportunities of rural Americans by offering innovative, quality arts programming, and demonstrating how the arts can be used as an economic development tool in rural communities across the nation."

All content from Kiddle encyclopedia articles (including the article images and facts) can be freely used under Attribution-ShareAlike license, unless stated otherwise. Cite this article:
New York Mills, Minnesota Facts for Kids. Kiddle Encyclopedia.