Niagara Falls station is a railway station in Niagara Falls, Ontario, Canada. It is served by the Maple Leaf train between Toronto and New York City and is the terminus of GO Transit's Lakeshore West line towards Toronto. 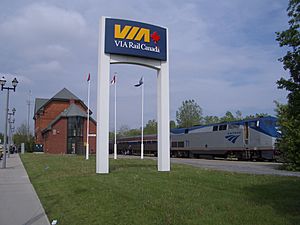 The Victorian Gothic Revival style station was built as the terminus for Great Western Railway (1879–1882) and Grand Trunk Railway (1882–1923). During the period, it was the busiest and the grandest station owned by the railway. The station was renovated in 1951 and the east wing, once housed a restaurant, was partially demolished in 1967. It was acquired by CN Rail for passenger service from 1923 until the 1970s, since when it has been used by Via Rail Canada and more recently by GO Transit since 2009.

In 2012, as a result of federal funding cuts Via Rail Corridor trips between Toronto and Niagara Falls were discontinued, leaving only the single daily Via/Amtrak Maple Leaf service between Toronto and New York. In October 2012, the ticket agent was eliminated, replaced by an automated kiosk.

GO Transit operated summer 'excursion' trains to Niagara Falls on weekends and holidays in 2009 and 2010, making them permanently recurring in 2011. Starting in January 2019, it also began operating a single weekday train trip to and from Niagara Falls. In September 2019, the formerly summer-only weekend train service was extended year-round.

GO Transit was expected to expand full-time rail service along the Niagara Branch to Niagara Falls by 2023 and with it upgrades to the station.

Amtrak and Via Rail Canada jointly operate the Maple Leaf train service between Toronto and New York City. The service uses Amtrak rolling stocks, but ticketing is shared, and Via crew operates the train along all Canadian stops until it reaches the station where Amtrak crew takes over the operation. The station is served once daily in each direction. In March 2020, Maple Leaf service at the station was suspended indefinitely as part of a closure of the Canada-US border to non-essential travel in response to the ongoing coronavirus pandemic, with trains truncated to Niagara Falls, New York.

Aside from the Maple Leaf, GO Transit also operates the Lakeshore West commuter rail line between Toronto and Niagara Falls. Before the pandemic, the station was served by one peak-direction GO Transit train per weekday, and 3 to 4 trains throughout the day on weekends and holidays. GO trains still served the station throughout 2020 (albeit on weekends only) despite the pandemic, until Metrolinx announced its suspension from January 9, 2021 due to the Ontario province-wide COVID-19 shutdown. GO train service to the station will resume sometime in the spring of 2021.

There are no US preclearance facilities at this station for the Maple Leaf train as this station and its sister station in Niagara Falls, New York are both located along the Canada-US border. Therefore, passengers arriving from the US will be inspected by Canada Border Services Agency (CBSA) officers at the station. Passengers leaving for the US will be processed by Customs and Border Protection (CBP) officers at the Niagara Falls, New York station on the other side of the Whirlpool Rapids Bridge.

In January 2020, US Senator Chuck Schumer of New York urged the CBSA to open a preclearance facility in the newer Niagara Falls, New York station as one of Canada’s first preclearance operations to improve what he described as an “unpleasant” Canadian inspection experience in the current open-air and uncovered location. In response, the CBSA said it would not commit to a timeline to open any preclearance facilities in the US. 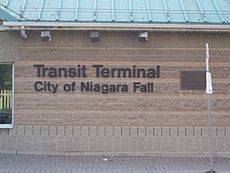 The Niagara Falls Transit Terminal is located directly across Bridge Street from the railway station and serves as the main local, regional and intercity bus terminal for the area. Unlike the train station, the transit terminal is owned and operated by the city of Niagara Falls, Ontario.

All content from Kiddle encyclopedia articles (including the article images and facts) can be freely used under Attribution-ShareAlike license, unless stated otherwise. Cite this article:
Niagara Falls station (Ontario) Facts for Kids. Kiddle Encyclopedia.