SG̱ang Gwaay Llanagaay ("Red Cod Island"), commonly known by its English name Ninstints, is a village site of the Haida people and part of the Gwaii Haanas National Park Reserve and Haida Heritage Site on Haida Gwaii on the North Coast of British Columbia, Canada.

The village site is a UNESCO World Heritage Site, a National Historic Site of Canada, and a National Marine Conservation site.

SG̱ang Gwaay llnagaay today features the largest collection of Haida totem poles in their original locations, many celebrated as great works of art, though they are being allowed to succumb to the natural decay of the lush temperate rainforest climate. Images of the ruins of SG̱ang Gwaay llnagaay are emblematic of Haida culture and of Haida Gwaii and are featured in tourism promotions for the islands and the province at large. The site is extremely remote, and access is only by sea or air from towns in the northern part of the islands. To protect the valuable Haida Heritage Sites, the Haida operate a Watchmen program, stationing Haidas at traditional village sites throughout Haida Gwaii including within Gwaii Haanas National Park Reserve and Haida Heritage Site. The Watchmen ensure that visitors are acting in an appropriate manner and maintain a presence on their traditional territories. 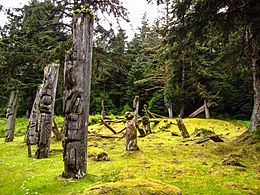 Archaeological evidence shows that Haida Gwaii have been inhabited for thousands of years, with territories of the Haida extending North into Alaska.

The people of SG̱ang Gwaay llnagaay are sometimes referred to as the Kunghit Haida. The Kunghit Haida occupied the southern portion of the archipelago of Haida Gwaii, with territory stretching from Lyell Island to the farthest southern tip of the archipelago. They had approximately two dozen permanent villages, as well as other smaller seasonal settlements located near major resource areas. Early records of Haida testimony recorded by John R. Swanton place the number of long houses at twenty.

Larger Kunghit Haida villages had as many as twelve or more longhouses, each which housed approximately thirty or forty longhouses, with village populations ranging from less than two hundred to more than five hundred. One of the chiefs of the Ninstints lineage, whose English name was Thomas Price, was a noted and highly artistic carver of Haida art, notably in argillite.

SG̱ang Gwaay Llanagaay was the location of several notable episodes in the early history of European contact and trade with the Haida. At the outset of the maritime fur trade, the village was visited in 1787 by George Dixon, who noted the Haidas who met them at sea were eager to trade with sea otter fur. This marked the initially amicable trade relations, where SG̱ang Gwaay Llanagaay was visited once again in 1788 by Charles Duncan, and twice in 1789 – first by Robert Gray then by his partner John Kendrick later that year, at which point the trade relationship turned hostile.

In the decades which followed, the trade relationship improved between the Haida and European traders in the area. Because of this many moved to economic hubs such as Masset, Skidegate, and as far as Victoria to take advantage of this growing relationship.

For those who remained at SGang Gwaay Llanagaay, their population was greatly reduced by the 1862 Pacific Northwest smallpox epidemic. In the succeeding years the population continued to decline due to other introduced diseases. Sometime around 1885 the remnants of the people of SGang Gwaay Llanagaay moved to Skidegate. By 1875 the site was used primarily as a camp.

All content from Kiddle encyclopedia articles (including the article images and facts) can be freely used under Attribution-ShareAlike license, unless stated otherwise. Cite this article:
Ninstints Facts for Kids. Kiddle Encyclopedia.