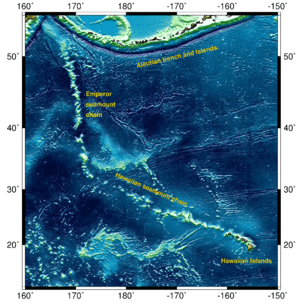 Nintoku Seamount (仁徳海山) is an underwater volcano (seamount) of the Hawaiian–Emperor seamount chain in the Pacific Ocean. Nintoku is an extinct volcano.

The seamount is also known as the "Nintoku Guyot" because it has a flat top. This undersea geologic feature is also called a "guyot" or "tablemount".

This seabed mountain is named after Emperor Nintoku of Japan.

The last eruption from Nintoku seamount was 65 million years ago.

All content from Kiddle encyclopedia articles (including the article images and facts) can be freely used under Attribution-ShareAlike license, unless stated otherwise. Cite this article:
Nintoku Seamount Facts for Kids. Kiddle Encyclopedia.