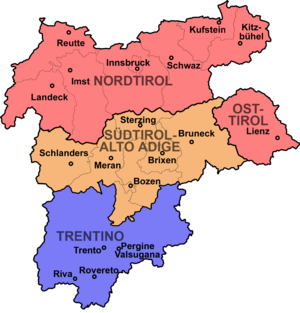 Map of the Tyrol pre-World War I

North Tyrol, or North Tirol (German: Nordtirol) is the main part of the Austrian state of Tyrol, located in the western part of the country. The other part of the state is East Tyrol, which also belongs to Austria, but does not share a border with North Tyrol.

Besides those two regions, the historical region of Tyrol also included the areas today known as Bolzano-Bozen and Trento for many centuries. They were annexed by Italy after World War I which made North Tyrol and East Tyrol effectively cut off from each other.

North Tyrol borders Salzburg in the east, the German state of Bavaria in the north, Vorarlberg in the west, the Swiss canton of Graubünden in the southwest and Bolzano-Bozen in the south. Its capital is Innsbruck.

All content from Kiddle encyclopedia articles (including the article images and facts) can be freely used under Attribution-ShareAlike license, unless stated otherwise. Cite this article:
North Tyrol Facts for Kids. Kiddle Encyclopedia.