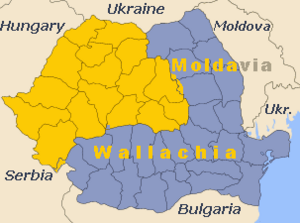 Map of Romania, the part in yellow is Transylvania 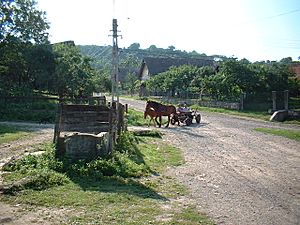 Transylvania is a historical region in Central Europe. In the past, it was a part of Hungary, was an independent principality, belonged to the Ottoman Empire or was a province of Austria-Hungary. It has been part of Romania since 1918.

The borders was made up by the Siret River from east, river Tisza from west of north and south by the Carpathian Mountains.

Transylvania's main city, Cluj-Napoca, is seen as the region's informal capital. But Transylvania was also ruled from Alba Iulia during its dependence from the Ottoman Empire, and the seat of the Transylvanian Diet was moved to Sibiu for some time in the 19th century.

In popular culture, Transylvania is mainly known as the seat (and origin) of Count Dracula. This vampire story by Bram Stoker is based on a local nobleman Vlad III the Impaler, known for his cruelty. It also was the home of Elizabeth Báthory.

All content from Kiddle encyclopedia articles (including the article images and facts) can be freely used under Attribution-ShareAlike license, unless stated otherwise. Cite this article:
Transylvania Facts for Kids. Kiddle Encyclopedia.