The northern waterthrush (Parkesia noveboracensis) is one of the larger New World warblers and one of the Nearctic-Neotropical migratory songbirds. It breeds in the northern part of North America in Canada and the northern United States including Alaska. This bird is migratory, wintering in Central America, the West Indies and Florida, as well as in Venezuela, Colombia, and Ecuador. It is a very rare vagrant to other South American countries and to western Europe.

The genus name Parkesia commemorates Kenneth Carroll Parkes, American ornithologist and curator of the Carnegie Museums of Pittsburgh, and noveboracensis is New York, the type locality from Latin novus, "new" and Eboracum, York. 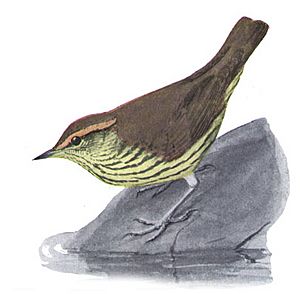 The only species bird watchers confuse with the northern waterthrush is the closely related Louisiana waterthrush (Parkesia motacilla), which has buff flanks, a buff undertail, and bright pink legs. The Louisiana waterthrush also has a whiter throat with fewer streaks. More subtle clues include smaller size and smaller bill, a narrower and darker eye-line, and different call note and habits.

Both waterthrush species walk rather than hop, and seem to teeter, since they bob their rear ends as they move along.

On the wintering grounds in Puerto Rico, northern waterthrushes leave daytime foraging areas and fly up to 2 km (1.2 mi) to nighttime roosts. The roosts are often located in red mangrove habitats. Northern waterthrushes winter in 4 main habitats in Puerto Rico: white mangrove, red mangrove, black mangrove, and scrub. Males, which are larger and migrate earlier in spring, prefer to winter in white mangrove, and are able to maintain or gain weight through the winter. Females winter in the other drier and less food-rich habitats.

Waterthrushes wintering in red and black mangrove can maintain body weight through the winter but lose weight in scrub. Another determinant in body mass increase in the wintering grounds is moisture. 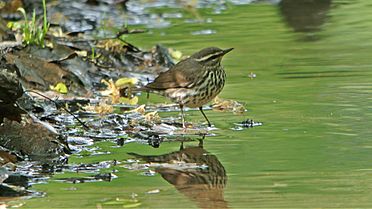 The breeding habitat of the northern waterthrush is wet woodlands near water. It nests in a stump or among tree roots where it lays three to six eggs, cream- or buff-colored, with brown and gray spots. These eggs are laid in a cup nest constructed of leaves, bark strips, and rootlets.

All content from Kiddle encyclopedia articles (including the article images and facts) can be freely used under Attribution-ShareAlike license, unless stated otherwise. Cite this article:
Northern waterthrush Facts for Kids. Kiddle Encyclopedia.