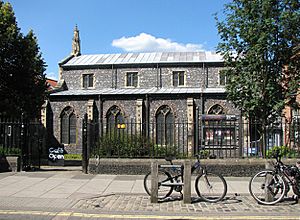 The Norwich Arts Centre, formerly the church of St. Swithin, in 2010

Norwich Arts Centre is a live music venue, theatre and art gallery located in St. Benedict's Street in Norwich, Norfolk, England. It has a capacity of 260 for standing music concerts and 120 for seated events. In November 2014, it was named "Britain's Best Small Venue" by the NME. 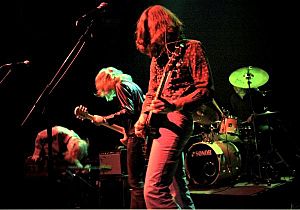 Plan Nine playing at the Norwich Arts Centre (May 2007)

The venue opened in 1977 in an old department store on St. Benedicts Street. It moved to its current site, St Swithin's Church, in 1980. It was originally known as "Premises".

The venue is especially noted by rock music fans for being the site where Richey Edwards of the Manic Street Preachers carved the words "4 Real" into his forearm with a razor blade to make a statement to journalist Steve Lamacq, after a gig on May 15, 1991.

The church which houses the Norwich Arts Centre is dedicated to Saint Swithun and dates to the fifteenth century, although an earlier, Anglo-Saxon church may have existed on the site. The area was originally a wealthy one, with four medieval churches close to each other. However it had become a slum by the nineteenth century. St. Swithin's became redundant and was closed in 1881. In 1882, the church's tower was demolished as it had become unsafe, this was later replaced by a bell-cot. The building was back in use as a church between 1883 and 1891, after which time it fell into disrepair.

In 1905, a clergyman, John Sawbridge, raised funds for it to be reopened as an Evangelical church, to cater for the poor and deprived surrounding area. There was sufficient money for a large, adjoining parish mission and school room to be constructed in 1908. However, by 1951, the church was again redundant due to falling numbers of local residents.

It was used as a furniture warehouse until it was taken over by the Arts Centre in 1980. The church itself became an auditorium, and the schoolroom became an exhibition space and cafe.

Little of the interior of the church remains in place except for ten monuments, the oldest being to Sibilla Skottowe (died 1657) and Anne Skottowe (died 1662). Another monument is to William Abbott (1754-1818), a veteran of the American War of Independence, who served at the Battle of Bunker Hill.

All content from Kiddle encyclopedia articles (including the article images and facts) can be freely used under Attribution-ShareAlike license, unless stated otherwise. Cite this article:
Norwich Arts Centre Facts for Kids. Kiddle Encyclopedia.