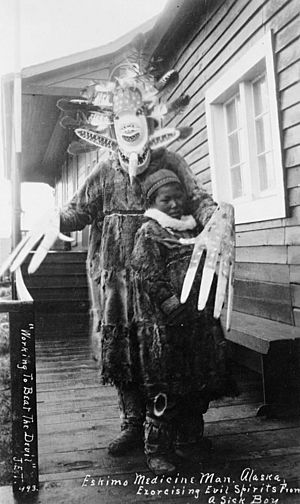 Nushagak was a trade center and settlement near the present-day site of Dillingham, Alaska, United States, at the northern end of Nushagak Bay in northern Bristol Bay. It was located near the confluence of the Wood and Nushagak Rivers.

The area was inhabited by Yup'ik people and Athabaskan peoples. In 1818 Russians built the post of Alexandrovski Redoubt (Post) there. A Russian Orthodox mission was established there in 1837, by which time the community was known as Nushagak. Nushagak became a place where different Alaska Native groups from the Kuskokwim River, the Alaska Peninsula and Cook Inlet came to trade or live.

The Pacific Steam Whaling Company built a cannery there in 1899 with Crescent Porter Hale as its first superintendent. It was bought by Pacific Packing and Navigation Co in 1901 and after its demise, Northwestern Fisheries Co. in 1904. Pacific American Fisheries bought the property in 1933 along with others in the region but never operated the Nushagak cannery. It was leased to Lowes Trading Company in 1936 and closed after the 1937 season following death of Lowes' manager, Alex Bradford, and reports of financial difficulties. The second cannery built in 1899 was owned by the Alaska Fisherman's Packing Co. It was bought by Libby, McNeill and Libby in 1916 and operated until 1936.

Despite the commanding position that the Point offered over the entire upper Nushagak Bay, it suffered from extensive and growing mud flats that limited access to vessels except during the bay's extreme high tides. Nushagak Point remains the location of some productive salmon set net sites. Artifacts from the cannery era, such as donkey engines, still remain.

The world wide influenza pandemic of 1918 devastated the region in 1919, and contributed to the depopulation of Nushagak. After the epidemic a hospital and orphanage were established in Kanakanak, across the river and 6 miles (10 km) from the present-day city center of Dillingham.

All content from Kiddle encyclopedia articles (including the article images and facts) can be freely used under Attribution-ShareAlike license, unless stated otherwise. Cite this article:
Nushagak, Alaska Facts for Kids. Kiddle Encyclopedia.