Oak City is a town in Millard County, Utah, United States. The population was 650 at the 2000 census.

According to the United States Census, the town has a total area of 0.7 square miles (1.7 km²), all of it land.

There were 167 households out of which 57.5% had children under the age of 18 living with them, 79.6% were married couples living together, 3.0% had a female householder with no husband present, and 15.6% were non-families. 15.0% of all households were made up of individuals and 9.6% had someone living alone who was 65 years of age or older. The average household size was 3.89 and the average family size was 4.40. 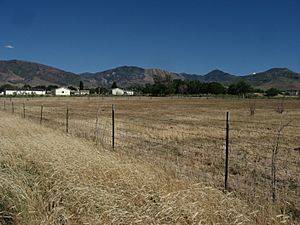 The settlement of Oak City was begun in late summer of 1868, when a few families moved there from the community of Deseret, Utah. They had become discouraged after eight years of unsuccessful attempts to dam the Sevier River to provide water for their crops, and had left the area. The early settlers were familiar with the Oak City area because they had pastured their cattle there in the spring and fall. They chose this area to settle because of the reliable creek and the quality of the land for farming. The town was settled in two phases. The first phase took place in July 1868 and consisted of a few families and young men to survey the town site, clear the land for farming, and provide shelter for the coming winter. Twenty-three more families came in October and November of that year.

Oak City in Millard County, Utah, was the search director's first choice for the atomic weapons laboratory. Maj. John Dudley of the Manhattan District Staff was assigned to survey the West and find potential sites for an atomic laboratory in October 1942. His first choice for the laboratory site was Oak City, Utah, according to the Los Alamos history. "It was a delightful little oasis in south central Utah," Dudley wrote. "The railroad was only 16 miles away over a nice, easy road. The airport was not too distant. The water supply was good. It was surrounded by hills, and beyond there was mostly desert. However, I noticed one thing: If we took over this area we would evict several dozen families and we would also take a large amount of farm acreage out of production."

Because of the potential loss of farmland, Dudley recommended his second choice — Jemez Springs, New Mexico. In the end, Dudley's choice was overruled by J. Robert Oppenheimer, a physicist and the scientific director of the Manhattan Project. He favored Los Alamos.

Oak City Days is held the third week of August every year when the citizens of Oak City host a two-day event to celebrate the founding of the city. It has also been known as ward days and homecoming in the past. Oak City Days is kicked off with a parade on Friday evening followed by an ice cream social. Following the ice cream social there is a program. There are also various competitions such as a Rook tournament. On Saturday a town lunch is prepared which feeds over 1000 people. Craft booths, kids games (including a children’s fish catch), as well as adult fun fill the day. The festivities end with a dance under the stars with music by the local band The Moonlighters.

All content from Kiddle encyclopedia articles (including the article images and facts) can be freely used under Attribution-ShareAlike license, unless stated otherwise. Cite this article:
Oak City, Utah Facts for Kids. Kiddle Encyclopedia.