The Treasury Building was constructed between 1858–62, and is considered one of Australia's finest Renaissance Revival buildings, constructed in palazzo form and built from wealth accumulated during the Victorian Gold Rush. One original purpose was to house some of that wealth in the 'gold vaults' in the basement, but by the time it was finished the rush was over, and they were used to store government documents instead.

The building was designed by young architect J. J. Clark who was just 19 years of age. The oldest surviving designs for the building date back to 1857, and many of J J Clark's drafts are on display throughout the building. Clark later went on to design many government buildings both in Victoria and elsewhere, notably the Brisbane Treasury in Queensland, considered to be another fine example in a classical style. Architectural historian Miles Lewis once described The Old Treasury as the "finest public building exterior in Australia".

While the building itself was completed in 1862, a shortage of funds meant that the forecourt remained unfinished. Until 1868 the front steps and terrace were temporary, with individual staircases leading to the three main front doors. These were replaced with the grand forecourt still standing today.

It is the cornerstone of the Treasury Reserve government precinct adjacent to the Treasury Gardens and creates an important vista terminating Collins Street, the financial spine of the city.

When the official treasury offices were moved next door to 2 Treasury Place in 1877-78, the building was nicknamed the 'Old Treasury'.

As a leading public building in Melbourne, located in a prominent position with open space around it, the Old Treasury has been the focus for many celebrations and major public events. The arrivals and departures of the Governors of Victoria were occasions for expressions of loyalty to the Crown and sometimes for political statements. In recent years it has been the destination for the Grand Final parade of AFL footballers.

The building is also notable as it was the unofficial first capital building of Australia. In February 1899, a "secret" Premiers' conference was convened, after which it was decided Melbourne's Parliament House would be the temporary capital until the location of the Australian National Capital was officially decided.

Establishment of a museum 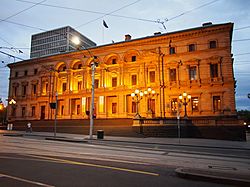 The Old Treasury Building at dusk in 2012

During the 1970s, the Victorian government, led by Premier Dick Hamer was developing policy for museums in Victoria. In 1981, Hamer's Arts Minister, the Hon. Norman Lacy, established a Museums Development Committee to develop a comprehensive museums policy for Victoria.[1] He then also proposed to the Executive Committee of Victoria's 150th Anniversary Celebrations in 1984 that a new Museum of Social and Political History be established at the Old Treasury Building. [2]

The museum's permanent exhibition, 'Melbourne: Foundations of a City', presents a rich narrative of Victoria's history from the 1830s, highlighted by key documents and artifacts from Public Record Office Victoria (PROV). These documents and artifacts, some once held in the Old Treasury Building basement, explore themes of Indigenous Victorians and first white settlement in 1835, Criminals, Victorian Democracy, Victorians at Work and the Gold Rush.

'Built on Gold' is particularly inspired by the epic story of the Victorian gold discoveries from 1852 to 1862. In those ten years Melbourne was transformed from a struggling settlement town into a bustling city of international reputation, and the exhibition traces this story through historical themes and explores the economic, cultural and recreational aspects of the city's life, then and now.

Presented through a dynamic combination of significant artefacts, images and multimedia exhibits the Old Treasury Building Museum brings history to life. Included in the displays are highlights from Public Record Office Victoria including an ever changing collection of original documents which illustrate Melbourne's cultural heritage. Temporary exhibitions further expand on the museums themes and offer more contemporary commentaries.

Other exhibitions include Growing up in Old Treasury, exploring the life and home of the Old Treasury’s caretaker John Maynard and his family, and The Melbourne Panorama where you can view a 360-degree historic photographic panorama of the City of Melbourne taken in 1862.

The Old Treasury Building features in the climactic sequence of the film Knowing (2009). Though set in Boston, Massachusetts, the movie was shot in Melbourne (the two cities are officially recognised as being sister cities). A number of other Melbourne landmarks are also featured.

The Old Treasury was built house the Treasury Department and store gold, but also provided offices for the leaders of the young colony, including the Governor, the Premier (at the time called Chief Secretary), the Treasurer and the Auditor General. Since its construction in 1862, it has also held the office of His Excellency the Governor of Victoria, who still holds weekly meetings of the Executive Council, consisting of the Governor and at least two Ministers of the Crown, that is, the leaders of the governing party. The Governor in Council as this meeting is called, is the formal enacting of legislation when the Governor's signature and the Great Seal of Victoria is put in place on the bill. Various other appointments and other regulations are also formally made at this weekly meeting, upon the advice of the Premier and Parliament of Victoria.

In addition to the museum, the Old Treasury Building is now home to Leadership Victoria, the Office of the Victorian Government Architect, The Victorian Marriage Registry, and offices for most living former Premiers of Victoria.

All content from Kiddle encyclopedia articles (including the article images and facts) can be freely used under Attribution-ShareAlike license, unless stated otherwise. Cite this article:
Old Treasury Building, Melbourne Facts for Kids. Kiddle Encyclopedia.