Omer is a city in Arenac County in the U.S. state of Michigan. As of the 2010 census, the city population was 313. Though self-proclaimed through signage on US 23 as "Michigan's Smallest City," it is actually the second-smallest city in the state as of the 2010 census. The smallest city distinction as of 2010 belongs to Lake Angelus in northern Oakland County, with a population of 290.

Omer was founded by George Gorie and George Carscallen, who set up a sawmill along the Rifle River in 1866. The town was originally named Rifle River Mills, but Carscallen, the first postmaster, wanted to rename the town Homer. However, he found a post office in another town called Homer, Michigan and simply dropped the leading H, producing the final name. The community receive a station on the Detroit and Mackinaw Railroad, while in 1872 the area was platted. In 1883, Omer was split off from Bay County into the newly formed Arenac County.

Omer was incorporated as a city in 1903. A fire in 1914 almost eliminated the city, destroying 40 buildings and ending the early thrive that Omer had. Two years later, a flood curtailed rebuilding efforts by washing out the local dam.

Omer is the location of the story of the "cussing canoeist", the man who received a ticket under a century-old law for shouting a long stream of expletives in the presence of a woman and her two young children after he fell out of a canoe on the Rifle River. The American Civil Liberties Union intervened on the canoeist's behalf and got the law struck down in court.

The second concerns the successful secession of two households from the city because the City of Omer was charging them a water tax while refusing to deliver water service to their property. 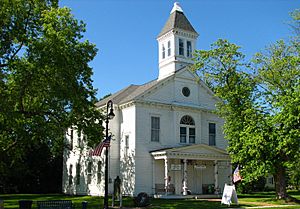 The former Second Arenac County Courthouse is listed on the National Register of Historic Places. It later became a Masonic hall and is presently the home of the Arenac County Historical Society.

There were 131 households of which 32.1% had children under the age of 18 living with them, 41.2% were married couples living together, 13.0% had a female householder with no husband present, 8.4% had a male householder with no wife present, and 37.4% were non-families. 28.2% of all households were made up of individuals and 13.7% had someone living alone who was 65 years of age or older. The average household size was 2.39 and the average family size was 2.84.

There were 143 households out of which 26.6% had children under the age of 18 living with them, 54.5% were married couples living together, 10.5% had a female householder with no husband present, and 30.8% were non-families. 24.5% of all households were made up of individuals and 13.3% had someone living alone who was 65 years of age or older. The average household size was 2.36 and the average family size was 2.82.

Like many small towns in northern mid-Michigan, the height of activity in Omer centers on an influx of people during the spring and summer. The Rifle River that intersects the city attracts thousands per year during the sucker season. Folks from all over the Midwest and Canada line the shores and engage in the sport of sucker fishing in the spring. Up until the late 1980s, Omer held an annual Sucker Festival and tournament, wherein the town would swell to some 3,000 sucker dippers and revelers. But it was eventually ended when it became too expensive for the small city to buy the insurance necessary to host it. The tournament was revived in 2008, thanks to two local sponsors.

All content from Kiddle encyclopedia articles (including the article images and facts) can be freely used under Attribution-ShareAlike license, unless stated otherwise. Cite this article:
Omer, Michigan Facts for Kids. Kiddle Encyclopedia.