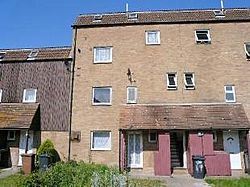 New Town architecture in the Ortons

Orton is a mostly residential area of the city of Peterborough, Cambridgeshire in the United Kingdom. For electoral purposes it comprises Orton Longueville, Orton Waterville and Orton with Hampton wards in North West Cambridgeshire constituency.

Orton was designated the second township in the new town expansion of Peterborough in 1967. It is composed of the ancient villages of Orton Waterville and Orton Longueville, together with the newer developments of Orton Brimbles, Orton Goldhay, Orton Malborne, Orton Southgate, Orton Wistow and most recently Orton Northgate. All lie south of the River Nene and are thus historically in Huntingdonshire, but are not in the current local government district of that name.

In common with many New Towns the Ortons are characterised by extensive landscaping and tree planting. The A605 runs through the Ortons, connecting Peterborough to the A1(M) which runs from London to Edinburgh. There is no church in Orton Wistow or Orton Northgate: these both fall within the parish of St. Andrew's, Alwalton.

As the Ortons were established, health centres were constructed, initially in Herlington and then at the Orton Centre. For a short time there was also a small branch surgery in Orton Wistow. Due to the expansion of the area and decay of the premises at Herlington, the Orton Wistow surgery was replaced by a new surgery at Clayton, Orton Goldhay.

In 2001 Anglia Regional Co-operative Society closed its Rainbow supermarket at Orton Centre, the only major supermarket serving the Ortons. This was widely assumed to be due to competition from the Tesco Extra which had opened at nearby Serpentine Green in Hampton and the ongoing degeneration of the centre. In October 2008 the Co-operative returned to the Ortons with a new store in the regenerated Orton Centre, now renamed Ortongate.

This is an area of mixed public and private sector housing dating almost entirely from the 1980s. Orton Brimbles contains the Ortons' first and only purpose-built solar powered houses at Gostwick. There is also Ormiston Meadows Academy, formerly Matley Primary School, a mainstream primary school with Enhanced Resources provision for children with physical disabilities.

Orton Goldhay was laid out from the mid-1970s by Peterborough Development Corporation as part of the city's second township. The area is largely residential but contains the district shopping centre known as Orton Centre, and one of the Ortons' two secondary schools, Ormiston Bushfield Academy. Much of the housing here was built for the public sector and originally housed overspill population from London. 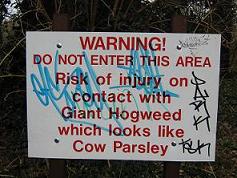 The perils of Giant Hogweed in the Ortons. The Hogweed has since been removed from that area, and as of writing is quite rare.

Until the 1960s Orton Longueville was a village separated from Peterborough by open farmland. Orton Longueville is home to Nene Park Academy, formerly Orton Longueville School. The 'village' contains many pre-20th-century buildings including Orton Hall, once used as a prisoner of war camp during the Second World War (now a hotel), several thatched cottages, a cricket field and the 13th century church of Holy Trinity. Holy Trinity contains many historic monuments to the families who once owned properties in the village, including the Huntly's and Cope's and also has a rare wall painting of St Christopher. There is still a village green and close by is a half-mile long plantation of giant redwood wellingtonia trees known as the 'Long Walk'. 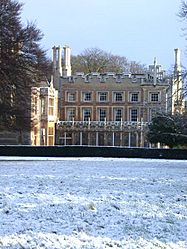 Similar in character to Orton Goldhay, this area was also created from the mid-1970s and lies along the dedicated bus route leading to the city centre. There are several local shops and a community centre.

This is mainly a business area containing offices and factories of Nokia, Telewest, NCR and others. It also contains a housing area centred on Dunblane Drive, which was partly built by Persimmon Homes around 1995, and added to by a small group of David Wilson Homes in around 1997.

The East of England Showground sold off some of its land to developers to expand the housing towards Alwalton, linking Dunblane Drive with Loch Lomond Way. However, there was a moratorium on building in October 2008, and as of February 2010 the site remained dormant. 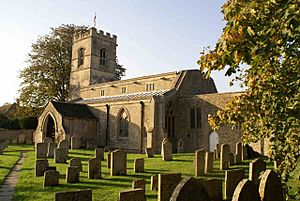 One of the original 'Ortons', Orton Waterville also retains a village atmosphere and contains many thatched and stone built cottages and the 13th-century parish church of St Mary's. It once had its own Orton Waterville railway station, but both the station and the line it stood on have now closed.

Orton Wistow was laid out during the 1980s by private developers, with the last developments being completed around 1992. This development lies adjacent to the Country Park known as Ferry Meadows and the Nene Valley Railway. There is a primary school called Orton Wistow Primary School.

All content from Kiddle encyclopedia articles (including the article images and facts) can be freely used under Attribution-ShareAlike license, unless stated otherwise. Cite this article:
Orton, Peterborough Facts for Kids. Kiddle Encyclopedia.