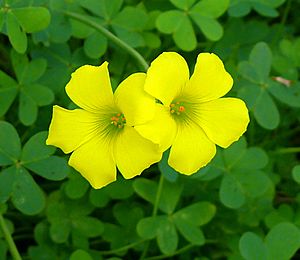 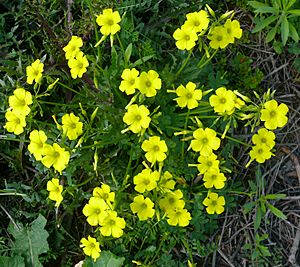 The Oxalis pes-caprae flower is actinomorphic, with a calyx composed of five free or slightly fused sepals, a sympetalous corolla composed of five fused petals, an apoandrous androecium composed of ten free stamens in two ranks, and a compound pistil.

Like most African Oxalis species, it produces adventitious subterranean propagules. These take the form of true bulbs in botanical terms, which is unusual among dicotyledons. In fact, Oxalis pes-caprae produces small bulbs copiously, whereas most other African species produce fewer, larger bulbs. New world Oxalis, such as Oxalis corniculata, apparently do not generally produce bulbs.

Indigenous to South Africa, Oxalis pes-caprae, the "Bermuda buttercup", is an invasive species and noxious weed in many other parts of the world, including the United States (particularly coastal California), Europe, Israel and Australia.

The plant has a reputation for being very difficult to eliminate once it has spread over an area of land. The weed propagates largely through its underground bulbs and this is one reason why it is so difficult to eradicate, as pulling up the stems leaves the bulbs behind. Soil in which the plant has grown is generally contaminated with many small bulbs. 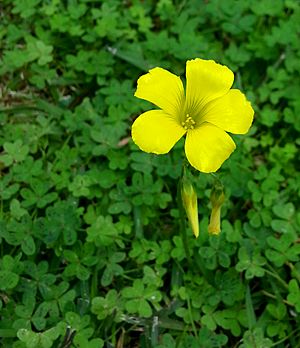 Details of open and closed flowers, in the background: leaves

Oxalis pes-caprae is often called by the common name sourgrass or soursob due to its pleasant sour flavor. This sourness is caused by the exceptionally high content of oxalic acid.

The plant is palatable and in modest quantities is reasonably harmless to humans and livestock. In South Africa it is a traditional ingredient in dishes such as waterblommetjiebredie (water flower stew).

The plant has been used in various ways as a source of oxalic acid, as food, and in folk medicine. The lateral underground runners, which tend to be fleshy, have been eaten raw or boiled and served with milk. The golden petals can be used to produce a yellow dye.

Oxalic acid is toxic in large quantities, a concern in regions such as southern Australia where Oxalis pes-caprae grows invasively in enormous quantities and in high densities. Various sources suggest that oxalis ingestion causes calcium oxalate kidney stones, but it's unlikely that any realistic intake of Oxalis would affect human. Accordingly, some Australian references to the hazards of oxalis to livestock tend to be dismissive of this risk.

However, in spite of its comparatively benign nature, where it has become dominant in pastures, as sometimes happens outside South Africa, Oxalis pes-caprae certainly can cause dramatic stock losses. For example, when hungry stock, such as sheep released just after being shorn, are let out to graze in a lush growth of Oxalis pes-caprae, they may gorge on the plant, with fatal results, as has been found in South Australia at least.

Oxalis poisoning of stock is not a serious forage concern in South African pastures, unless exceptionally favoured by overgrazing.

All content from Kiddle encyclopedia articles (including the article images and facts) can be freely used under Attribution-ShareAlike license, unless stated otherwise. Cite this article:
Oxalis pes-caprae Facts for Kids. Kiddle Encyclopedia.