The PS (paddle steamer ) Comet was built in 1812 for Henry Bell, hotel and baths owner in Helensburgh, and began a passenger service on 15 August 1812 on the River Clyde between Glasgow and Greenock, the first commercially successful steamboat service in Europe.

Henry Bell had become interested in steam-propelled boats, and corresponded with Robert Fulton to learn from the Charlotte Dundas venture.

In the winter of 1811/1812 he got John and Charles Wood of John Wood and Company, shipbuilders of Port Glasgow, to build a paddle steamer which was named Comet, named after the "Great Comet" of 1811. The 28 ton burthen craft had a deck 43.5 feet (13.3 m) long with a beam of 11.25 feet (3.43 m). It had two paddle wheels on each side, driven by a single-cylinder engine rated at 3 to 4 horsepower (2 to 3 kilowatts). The engine was made by John Robertson of Glasgow, and the boiler by David Napier, Camlachie, Glasgow (a story has it that they were evolved from an experimental little steam engine which Bell installed to pump sea water into the Helensburgh Baths). The funnel was tall and thin, serving as a mast, with a yard, allowing it to support a square sail when there was a following wind. A small cabin aft had wooden seats in front of concealed beds and a table. Comet was reported as "brightly painted, having for her figurehead a lady garbed in all the colours of the rainbow".

Comet was launched on 24 July 1812 with her trial run on 6 August from Port Glasgow to the Broomielaw in Glasgow, taking three and a half hours for the 20 miles (32 kilometres). The double paddlewheels were found to unsatisfactory and a pair of single wheels were substituted which increased her speed to almost 7 knots.

The Steamboat Comet Between Glasgow, Greenock and Helensburgh for Passengers Only

The subscriber, having at much expense, fitted up a handsome vessel to ply upon the River Clyde from Glasgow, to sail by the power of air, wind, and steam, intends that the vessel shall leave the Broomielaw on Tuesdays, Thursdays, and Saturdays about mid-day, or such hour thereafter as may answer from the state of the tide, and to leave Greenock on Mondays, Wednesdays, and Fridays in the morning to suit the tide.

On 15 August Comet made the first commercial sailing from Glasgow for Bowling, Helensburgh and Greenock, opening the era of the steamboat on the Clyde, and more widely in Britain and Europe. The fare was "four shillings for the best cabin, and three shillings for the second." As the vessel clearly had no cabins in the modern sense it is unclear what this meant. 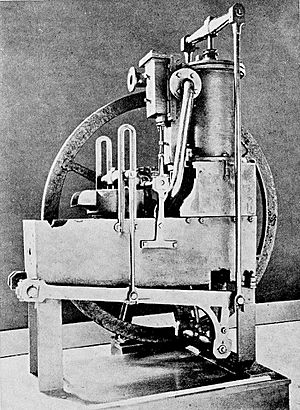 The original engine of Comet 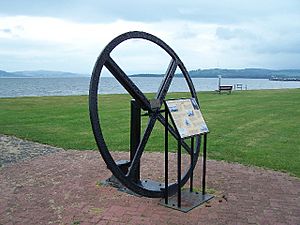 The success of this service quickly inspired competition, with services down the Firth of Clyde and the sea lochs to Largs, Rothesay, Campbeltown and Inveraray within four years, and the Comet was outclassed by newer steamers. Bell briefly tried a service on the Firth of Forth.

Bell had the Comet lengthened and re-engined, and from September 1819 ran a service to Oban and Fort William (via the Crinan Canal), a trip which took four days. On 15 December 1820 the Comet was wrecked in strong currents at Craignish Point near Oban, with Bell on board. No lives were lost. One of the engines ended its working days in a Greenock brewery, and is now in The Science Museum in London.

Bell built another vessel, Comet II, but on 21 October 1825 she collided with the steamer Ayr off Kempock Point, Gourock, Scotland.

The Ayr, we learn, had a light out upon her bow, but the Comet had none. As the night, however, was clear, it is obvious that a bad look out had been kept up, and most reprehensible neglect shown on both sides. At the moment the accident took place, those on the deck of the Comet were, it is said, engaged in dancing. The passengers who were below were in high spirits, amusing themselves telling and listening to diverting tales. The first stroke hit about the paddle of the Comet. The Captain and passengers immediately ran upon deck to see what was wrong; when – the next fatal stroke took place with such force, that the Comet filled, and in two minutes went down head foremost. The moment this look place, the Ayr, instead of lending any assistance, gave her paddles a back stroke, turned round, and went off to Greenock, leaving them to their fate.

Comet II sank very quickly, killing 62 of the estimated 80 passengers on board, including the son-in-law of John Anderson, a friend of Robert Burns. Also drowned were recently married Captain Wemyss Erskine Sutherland of the 33rd Regiment and Sarah née Duff of Muirtown. After the loss of his second ship, Bell abandoned his work on steam navigation. 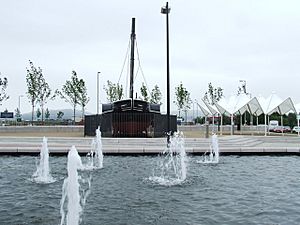 A replica of the Comet made by shipyard apprentices now stands prominently in Port Glasgow.

All content from Kiddle encyclopedia articles (including the article images and facts) can be freely used under Attribution-ShareAlike license, unless stated otherwise. Cite this article:
PS Comet Facts for Kids. Kiddle Encyclopedia.