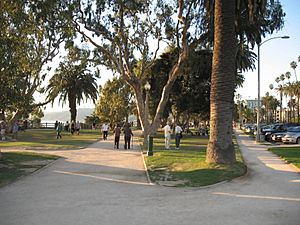 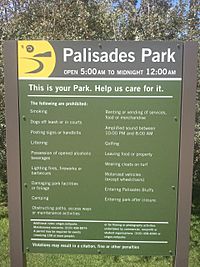 Palisades Park is a 26.4-acre (10.7 ha) park in Santa Monica, California. The park is located along a 1.6-mile (2.6 km) section of Ocean Avenue on top of an uplifted unconsolidated sedimentary coastal Quaternary terrace with exposed bluffs, offering views of both the Pacific Ocean and the coastal mountains.

The park extends from the Santa Monica Pier at the south to Adelaide Drive at the north. This long linear park contains public art, rose garden, and historic structures, as well as benches, picnic areas, pétanque courts, restrooms and the historic Santa Monica Camera Obscura.

Barriers discourage visitors from approaching too close to the cliffs, which are prone to erosion and landslides. Private use of the park by fitness instructors has generated some controversy.

The oldest structure built in Palisades Park is the Idaho Gate, a Craftsman-style archway built in 1912 and named for the adjacent street, and a distinctive Native American totem pole was donated to the City in 1926 by Walter J. Todd. After the installation of Eugene H. Monrahan's 1934 sculptural statue of Santa Monica, additional public art was installed more than fifty years later.

The park has more than 30 species of plants and trees, including gum, yate, pine, palm, and fig trees. Two stone monuments with plaques honor two noted tree experts, George Hastings and Grace Heintz, who both wrote books on the trees of Santa Monica. Spanning five decades from 1944 to 1989, the works provide five baseline studies for understanding the history and geography of the urban woodland of the park, as well as the trees in Santa Monica and neighboring portions of Los Angeles, including cemeteries, schools, colleges, and businesses.

Some of the tree species at Palisades Park include:

All content from Kiddle encyclopedia articles (including the article images and facts) can be freely used under Attribution-ShareAlike license, unless stated otherwise. Cite this article:
Palisades Park (Santa Monica) Facts for Kids. Kiddle Encyclopedia.