Roystonea regia, commonly known as the Cuban royal palm or the Florida royal palm, is a species of palm that is native to Mexico, parts of Central America and the Caribbean, and southern Florida. A large and attractive palm, it has been planted throughout the tropics and subtropics as an ornamental tree. Although it is sometimes called R. elata, the conserved name R. regia is now the correct name for the species. The royal palm reaches heights from 50 to over 80 feet tall. Populations in Cuba and Florida were long seen as separate species, but are now considered to belong to a single species.

Best known as an ornamental, R. regia is also used as a source of thatch, construction timber, and in some forms of so-called traditional medicine, although there is currently no valid scientific evidence to support the efficacy or use of any palm species for medicinal purposes. The fruit is eaten by birds and bats (which disperse the seeds) and fed to livestock. Its flowers are visited by birds and bats, and it serves as a roosting site and food source for a variety of animals. Roystonea regia is the national tree of Cuba, and has a religious role both in Santería and Christianity, where it is used in Palm Sunday observances. 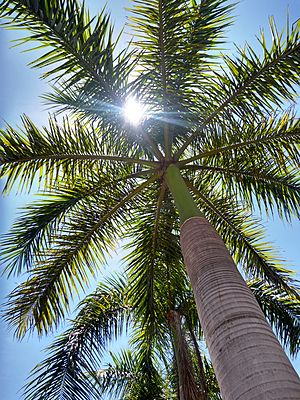 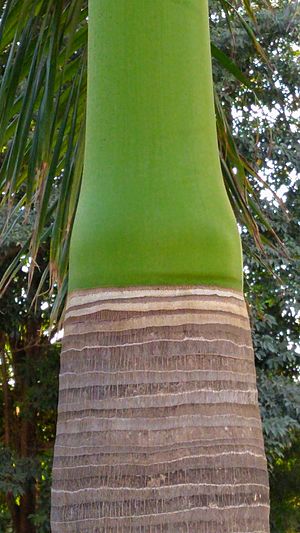 The distinctive smooth crownshaft and rows of circular leaf scars are clearly visible.

The species was first described by American naturalist William Bartram in 1791 as Palma elata based on trees growing in central Florida. In 1816 German botanist Carl Sigismund Kunth described the species Oreodoxa regia based on collections made by Alexander von Humboldt and Aimé Bonpland in Cuba. In 1825 German botanist Curt Polycarp Joachim Sprengel moved it to the genus Oenocarpus and renamed it O. regius.

The genus Oreodoxa was proposed by German botanist Carl Ludwig Willdenow in 1807 and applied by him to two species, O. acuminata (now known as Prestoea acuminata) and O.  praemorsa (now Wettinia praemorsa). Although these species were transferred to other genera, the genus Oreodoxa continued to be applied to a variety of superficially similar species which were not, in fact, closely related. To address this problem, American botanist Orator F. Cook created the genus Roystonea, which he named in honour of American general Roy Stone, and renamed Kunth's species Roystonea regia. 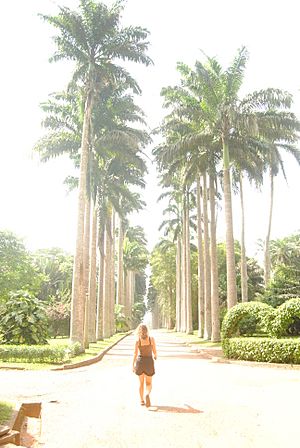 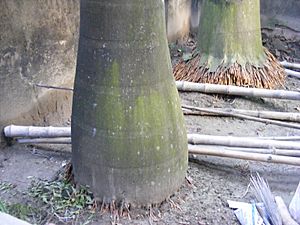 Stem base of two individuals in Kolkata showing fibrous roots typical of monocots.

Cook considered Floridian populations to be distinct from both the Cuba R. regia and the Puerto Rican R. borinquena, and he placed them in a new species, R. floridana, which is now considered a synonym of R. regia. In 1906 Charles Henry Wright described two new species based on collections from Georgetown, British Guiana (now Guyana) which he placed in the genus Euterpe — E. jenmanii and E. ventricosa. Both species are now considered synonyms of R. regia. The name R. regia var. hondurensis was applied by Paul H. Allen to Central American populations of the species. However, Scott Zona determined that they did not differ enough from Cuban populations to be considered a separate variety.

Based on the rules of botanical nomenclature, the oldest properly published name for a species has priority over newer names. Bartram applied the Linnaean binomial Palma elata to a "large, solitary palm with an ashen white trunk topped by a green leaf sheath [the crownshaft] and pinnate leaves" growing in central Florida. While no type collection is known, there are no other native palms that would fit Bartram's description. In 1946 Francis Harper pointed out that Bartram's name was valid and proposed a new combination, Roystonea elata. Liberty Hyde Bailey's use of the name in his 1949 revision of the genus, established its usage.

Harper's new combination immediately supplanted Cook's R. floridana, but there was disagreement as to whether Cuban and Floridian populations represented a single species or two species. Zona's revision of the genus concluded that they both belonged to the same species. According to the rules of botanical nomenclature, the correct name of the species should have been Roystonea elata. Zona pointed out, however, that the name R. regia (or Oreodoxa regia) has a history of use in horticulture that dated from at least 1838, and that the species had been propagated around the world under that name. Roystonea elata, on the other hand, had only been used since 1949, and was used much less widely. On that basis, Zona proposed that the name Roystonea regia should be conserved. 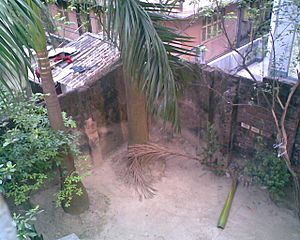 A pair of trees in Kolkata. Alongside on the ground is a freshly shed leaf with the sheath still green. 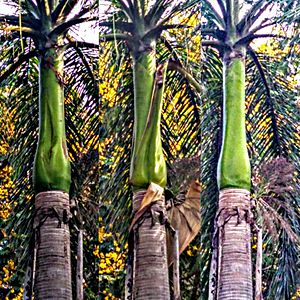 shedding of leaf in Royal palm

Roystonea regia produces unisexual flowers that are pollinated by animals. European honey bees and bats are reported pollinators. Seeds are dispersed by birds and bats that feed upon the fruit.

Seed germination is adjacent ligular—during germination, as the cotyledon expands it only pushes a portion of the embryo out of the seed. As a result, the seedling develops adjacent to the seed. The embryo forms a ligule, and the plumule protrudes from this. Seedlings in cultivation are reported to begin producing a stem two years after germination, at the point where they produce their thirteenth leaf. Growth rates of seedlings averaged 4.2 cm (1.7 in) per year in Florida.

Roystonea regia is found in Central America, Cuba, the Cayman Islands, Hispaniola (the Dominican Republic and Haiti), the Lesser Antilles, The Bahamas, southern Florida, and Mexico (Veracruz, Cabo San Lucas, Campeche, Quintana Roo, Yucatán). William Bartram described the species from Lake Dexter, along the St. Johns River in the area of modern Lake and Volusia Counties in central Florida, an area north of its modern range. It is also a popular ornamental tree in the Canary Islands. 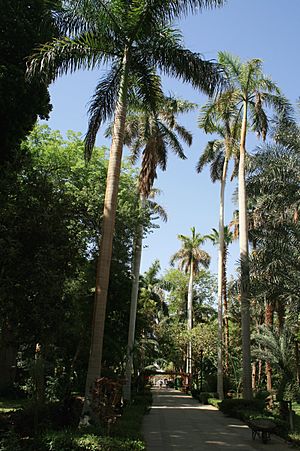 The leaves of Roystonea regia are used as roosting sites by Eumops floridanus, the Florida bonneted bat, and is used as a retreat for Cuban tree frogs (Osteopilus septentriolalis), a non-native species, in Florida. In Panama (where R. regia is introduced), its trunks are used as nesting sites by yellow-crowned parrots (Amazona ochrocephala panamensis). The flowers of R. regia are visited by pollen-collecting bees and are considered a good source of nectar. Its pollen was also found in the stomachs of Phyllonycteris poeyi, the Cuban flower bat (a pollen-feeder) and Monophyllus redmani, Leach's single leaf bat (a nectar-feeder). Artibeus jamaicensis, the Jamaican fruit bat, and Myiozetetes similis, the social flycatcher, feed on the fruit.

Roystonea regia is the host plant for the royal palm bug, Xylastodoris luteolus, in Florida. It also serves as a larval host plant for the butterflies Pyrrhocalles antiqua orientis and Asbolis capucinus in Cuba, and Brassolis astyra and B. sophorae in Brazil. It is susceptible to bud rot caused by the oomycete Phytophthora palmivora and by the fungus Thielaviopsis paradoxa.

The species is considered an invasive species in secondary forest in Panama.

Roystonea regia has been planted throughout the tropics and subtropics as an ornamental. The seed is used as a source of oil and for livestock feed. Leaves are used for thatching and the wood for construction. The roots are used as a diuretic, and for that reason they are added to tifey, a Haitian drink, by Cubans of Haitian origin. They are also used as a treatment for diabetes.

Fibres extracted from the leaf sheath of R. regia have been found to be comparable with sisal and banana fibres, but lower in density, making it a potentially useful source for the use in lightweight composite materials. An extract from R. regia fruit known as D-004 reduces benign prostate hyperplasia (BPH) in rodents. D-004, is a mixture of fatty acids, is being studied as a potential alternative to finasteride for the treatment of BPH.

All content from Kiddle encyclopedia articles (including the article images and facts) can be freely used under Attribution-ShareAlike license, unless stated otherwise. Cite this article:
Roystonea regia Facts for Kids. Kiddle Encyclopedia.