Palmyra is a census-designated place (CDP) in and the county seat of Fluvanna County, Virginia, United States. The population as of the 2010 census was 104. Palmyra lies on the eastern bank of the Rivanna River along U.S. Route 15. The ZIP code for Palmyra and surrounding rural land is 22963. 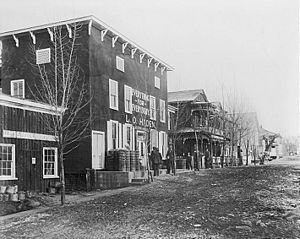 Before being named "Palmyra", the area was owned by the Timberlake family, and Reverend Walker Timberlake started a business there in 1814 called "Palmyra Mills".

The village of Palmyra was founded and became the county seat of Fluvanna County in 1828, and its historic courthouse was built in 1830-1831. By 1835, there were fourteen homes, a church, three factories, and various other businesses, though only two families owned all the land other than the public buildings. In the mid-19th century, it was a stop along the stagecoach route between Richmond and Staunton. The Virginia Air Line Railway, which operated from 1908 to 1975, ran through Palmyra. The train traveled from Strathmore on the James River, to Cohasset, to Carysbrook, to Palmyra, to Troy, and on to Gordonsville or Charlottesville.

A fire in 1930 destroyed many of the buildings on Main Street. As a result of the Great Depression, a smaller version of Palmyra was rebuilt after the fire.

Palmyra's climate is characterized by relatively high temperatures and evenly distributed precipitation throughout the year. The Köppen Climate Classification subtype for this climate is "Cfa"(Humid Subtropical Climate).

All content from Kiddle encyclopedia articles (including the article images and facts) can be freely used under Attribution-ShareAlike license, unless stated otherwise. Cite this article:
Palmyra, Virginia Facts for Kids. Kiddle Encyclopedia.