Palmyra is a village in Wayne County, New York, United States. The population was 3,536 at the 2010 census. The village, along with the town, is named after Palmyra in present-day Syria.

The Village of Palmyra is in the Town of Palmyra. The village is east of Rochester. 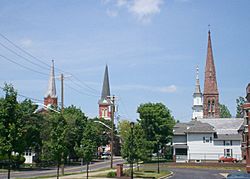 The village was originally called "Swift's Landing" after founder John Swift in 1790, and was incorporated as Palmyra in 1827. By 1900, the village had become a railroad and industrial center. Palmyra was a large part of the underground railroad during times of slavery, it is reported to have helped over 2,000 fugitive slaves escape into Canada.

Palmyra is part of the Erie Canalway National Heritage Corridor. Erie Canal Lock 29 is behind Palmyra-Macedon Aqueduct Park, just off N.Y. Route 31. It was built around 1914, and has a lift of 16 feet (4.88 m) to the west. Nearby are the remains of the Palmyra Aqueduct (built 1857), also known as Mud Creek Aqueduct. Before the Erie Canal was re-routed, it crossed the top of aqueduct over Ganargua Creek. The former Erie Canal Change Bridge #35 (also called Aldrich Bridge), is at Palmyra-Macedon Aqueduct Park. A change bridge allowed towpaths to switch from one side of the canal to the other. It was first constructed in 1858. The bridge was sold to a local farm in 1915, but later salvaged after flooding in 1996 and reconstructed eight years later at the park.

In 1830 the village was the site of the first publication of the Book of Mormon at the printing press of local publisher E. B. Grandin. Many other events in the early history of the Latter Day Saint movement took place in the village and town. The Book of Mormon Historic Publication Site has been maintained by The Church of Jesus Christ of Latter-day Saints since 1978 as a tourist destination and was restored and rededicated in 1998.

On May 3, 2013, a fire started by alleged arson destroyed three historic Main Street buildings dating to the village's Erie Canal era, and water from the firefighting response damaged a fourth. The buildings were condemned on May 7 and were demolished that summer. The buildings had survived proposed demolition during the urban renewal era of the 1960s. Business owner Mark Crane rebuilt his "Mark's Pizzeria" over several of the building sites, leaving one open for an outdoor seating area.

According to the United States Census Bureau, the village has an area of 1.3 square miles (3.4 km²), all of it land. 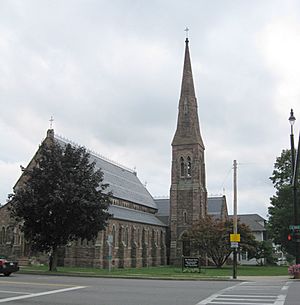 There were 1,508 households out of which 27.9% had children under the age of 18 living with them, 40.7% were married couples living together, 12.2% had a female householder with no husband present, and 41.5% were non-families. 33.4% of all households were made up of individuals and 12.2% had someone living alone who was 65 years of age or older. The average household size was 2.32 and the average family size was 2.99.

All content from Kiddle encyclopedia articles (including the article images and facts) can be freely used under Attribution-ShareAlike license, unless stated otherwise. Cite this article:
Palmyra (village), New York Facts for Kids. Kiddle Encyclopedia.