Paradiso is a municipality in the district of Lugano in the canton of Ticino in Switzerland. It lies on the shore of Lake Lugano and, although administratively independent of the city of Lugano, it is surrounded on all other sides by that city.

Paradiso is first mentioned in 1335 as Calprino. In 1835 it was first called Paradiso from a district of the village, though that didn't become the official name until 1929, also to avoid confusion with the hamlet of Caprino, across the lake.

Excavations in 1951 in Calprino discovered evidence of a Roman era settlement in the area. In the 7th century, there was a small Langobard settlement in the same area. The settlement of Morchino goes back to the 8th Century, while Calprino, Fontana and Guidino are each mentioned between the 12th and 14th centuries. In 1040 the Benedictine monastery S. Carpoforo owned land in Calprino. Between 1264-1375, they owned extensive lands and an episcopal fief in the village. In the 12th century, the Benedictine Abbey S. Ambrogio in Milan owned land in Guidino. By about 1335, the settlements that now make up Paradiso, formed part of the Council of sancti Petri di Pamio. The Council existed until the 19th Century and administered the community properties. 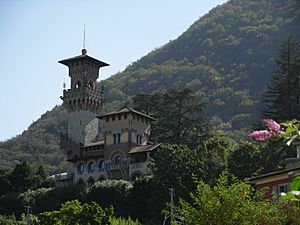 The church of Paradiso was the parish of Pambio. The Chapel of Beata Vergine alla Geretta has been occupied since the 16th Century.

The village economy was based on agriculture, mostly grain and vineyards. Then, in the 18th and 19th Century, the silk industry entered the village. Thanks to the views over Lake Lugano, Paradiso became a popular holiday resort after the opening of the Gotthard Railway in 1882. The funicular railway up Monte San Salvatore opened in 1890. The funicular and increasing lake traffic contributed to the further development of the hotel and tourism industry in Paradiso. At the same time, the population grew. The construction of the highway along the municipal border with Lugano in 1966 began to change the character of the municipality. At the beginning of the 21st Century, tourism began to decline and Paradiso began to develop into a residential community with many luxury buildings. 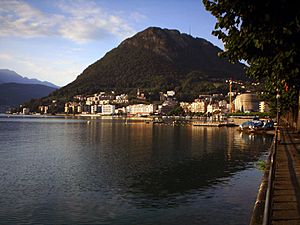 Paradiso is located at the foot, and up the lower slopes, of Monte San Salvatore, on the shores Lake Lugano. The municipality consists of the village of Paradiso, which is made up of the sections of Calprino, Guidino, Fontana and Morchino.

Of the built up area, housing and buildings made up 33.7% and transportation infrastructure made up 20.2%. Power and water infrastructure as well as other special developed areas made up 1.1% of the area while parks, green belts and sports fields made up 3.4%. Out of the forested land, 30.3% of the total land area is heavily forested and 5.6% is covered with orchards or small clusters of trees. Of the agricultural land, 2.2% is used for growing crops, while 1.1% is used for orchards or vine crops and 33.7% is used for alpine pastures. All the water in the municipality is in lakes. 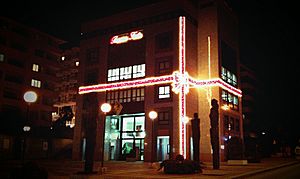 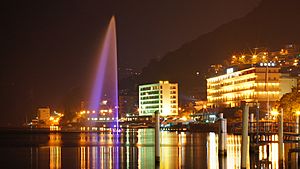 Paradiso with its water fountain

Paradiso has a population of 4524, based on the official 2012 figures published by the town, of which 1960 are Swiss nationals and 2564 foreign nationals. 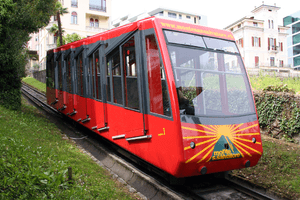 Paradiso railway station, on the Swiss Federal Railway's Gotthard Railway, is served by regular trains of the Treni Regionali Ticino Lombardia (TILO), which operate every half-hour between Bellinzona, Lugano and Chiasso. Some TILO trains continue to Milan in Italy, but most international trains pass through Paradiso without stopping, necessitating a change at Chiasso.

Paradiso is also connected to central Lugano by frequent bus services, operated by the Trasporti Pubblici Luganesi (TPL). TPL routes 1 and 2 both serve Paradiso, and each provides a bus every 15 minutes or less.

All content from Kiddle encyclopedia articles (including the article images and facts) can be freely used under Attribution-ShareAlike license, unless stated otherwise. Cite this article:
Paradiso, Ticino Facts for Kids. Kiddle Encyclopedia.