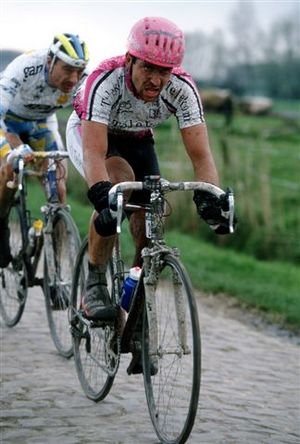 The Paris–Roubaix is a one-day professional men's bicycle road race in northern France, starting north of Paris and finishing in Roubaix, at the border with Belgium. It is one of cycling's oldest races, and is one of the 'Monuments' or classics of the European calendar, and contributes points towards the UCI World Ranking.

The Paris–Roubaix is famous for rough terrain and cobblestones, or pavé (setts), being, with the Tour of Flanders, E3 Harelbeke and Gent–Wevelgem, one of the cobbled classics. It has been called the Hell of the North, a Sunday in Hell (also the title of a film about the 1976 race), the Queen of the Classics or la Pascale: the Easter race. Since 1977, the winner of Paris–Roubaix has received a sett (cobble stone) as part of his prize.

The terrain has led to the development of specialised frames, wheels and tyres. Punctures and other mechanical problems are common and often influence the result. Despite the esteem of the race, some cyclists dismiss it because of its difficult conditions. The race has also seen several controversies, with winners disqualified.

From its beginning in 1896 until 1967 it started in Paris and ended in Roubaix; in 1966 the start moved to Chantilly; and since 1977 it has started in Compiègne, about 85 kilometres (53 mi) north-east of the centre of Paris. The finish is still in Roubaix. The race is organised by the media group Amaury Sport Organisation annually in mid-April.

The course is maintained by Les Amis de Paris–Roubaix, a group of fans of the race formed in 1983. The forçats du pavé seek to keep the course safe for riders while maintaining its difficulty.

Paris-Roubaix is one of the oldest professional bicycle races. Théo Vienne and Maurice Perez got the idea to run the race and in 1896, the sports newspaper Le Vélo worked out original route between Paris and Roubaix. The race has been contested every year since 1896, stopped only by the two World wars.

The first edition of the race was held at Easter, April 19 1896, so it got the nickname of La Pascale(English: The Easter).

The race is now organised by the media group Amaury Sport Organisation (ASO) who also run the Tour de France.

Riders are often covered from head to toe in mud and grit, and race over the cobblestoned roads and hard rutted tracks of northern France. However, the race got the nickname l'enfer du Nord, or the Hell of the North from journalists who watched the race after world war I, and saw it pass through many of the ruins, craters, and destruction along the way. 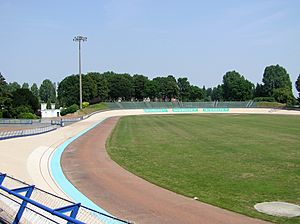 Originally, the race was from Paris to Roubaix, but in 1966 the starting location was moved to Chantilly, 50 kilometres to the north of Paris, to be moved in 1977 to Compiègne, approximately 80 kilometres to the north of Paris. Famous for rough terrain, the route of Paris-Roubaix is adjusted slightly from year to year as the older roads are resurfaced and the race organisers seek to replace them with other challenging cobbles, to maintain the character of the race - in 2005, for example, the race included 54.7 kilometres of cobbled sections. The race finishes with 750 meters on the smooth concrete expanses of the large outdoor velodrome in Roubaix.

The bicycles of Paris-Roubaix

All content from Kiddle encyclopedia articles (including the article images and facts) can be freely used under Attribution-ShareAlike license, unless stated otherwise. Cite this article:
Paris-Roubaix Facts for Kids. Kiddle Encyclopedia.