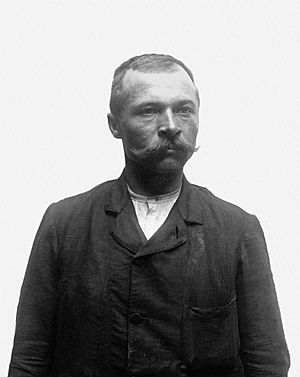 Garin was born in Arvier in the Aosta Valley in north-west Italy. He became a naturalized French citizen only in December 1901, when he was already a champion cyclist, winner of the second Paris-Roubaix.

He was declared the winner of the 1904 Tour de France, but was later disqualified. The Tour de France organisation and the French cycling authorities have not said why. They were said to have taken a train through part of the route. In the early days stages were much longer than today, sometimes starting in the dark.

When he retired from professional cycling he ran a small garage in Lens until his death.

He is buried in the Cimetière Est in the neighbouring suburb of Sallaumines.

All content from Kiddle encyclopedia articles (including the article images and facts) can be freely used under Attribution-ShareAlike license, unless stated otherwise. Cite this article:
Maurice Garin Facts for Kids. Kiddle Encyclopedia.