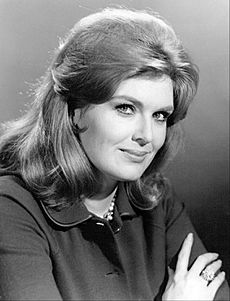 Patsy Lou Blake (also known as Patricia Blair; January 15, 1933 – September 9, 2013) was an American television and movie actress. She is best known for playing Rebecca Boone in all six seasons of NBC's Daniel Boone. She also played Lou Mallory in The Rifleman from 1962 to 1963. She was tall at 5 feet 9 inches. She could work with tall stars like Fess Parker (Daniel Boone) and Chuck Connors (The Rifleman).

Patricia Blair was born in Fort Worth, Texas. She died in North Wildwood, New Jersey at age eighty.

All content from Kiddle encyclopedia articles (including the article images and facts) can be freely used under Attribution-ShareAlike license, unless stated otherwise. Cite this article:
Patricia Blair Facts for Kids. Kiddle Encyclopedia.