After the Second Seminole War

When the Second Seminole War ended in 1842, the federal Armed Occupation Act was passed. It let Seminole War veterans apply for a 160-acre (0.6 km2) homestead in Florida.

At the same time, a reservation was created for the Seminoles in southwest Florida. Their ability to trade was limited by the government, so as to prevent them from obtaining weapons to cause further conflict. To compensate, white-run trading stores were permitted on the reservation's outskirts to the north and west, letting the Indians obtain supplies and luxuries unavailable within the reservation.

Many of the trading posts were built by Kennedy and Darling, two army sutlers from Fort Brooke who had started their own trading company. One such was constructed in the late 1840s along the Charlo-popka-hatchee-chee (Little Trout-Eating Creek in Seminole), west of Peas Creek (later known as the Peace River), near present-day Bowling Green. The proprietors were Capt. George Payne and Dempsey Whidden.

Ignoring the terms of the treaty with the Seminoles, settlers moved southward, encroaching on the reservation. Though Billy Bowlegs, one of their leaders, was reconciled to the state of affairs, others of his people were not so compliant.

On July 17, 1849, Payne and Whidden were killed by five renegade Seminoles, following which the store and everything in it was burned.

Site of the old fort

The attack on the trading post caused many of the settlers to flee to the nearest fort, then ask for military forces to be sent so they could return to their homes in safety. This led to the establishment of Fort Chokonikla near the site of the former trading post only three months later, on October 26. The fort's name is believed to derive from the Seminole "Chocka-nickler" meaning "burnt store". It was also variously spelled at the time as "Chokkonickla" or "Chokhonikla". 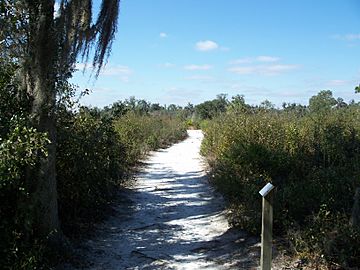 Following the fort's completion, the nearby creek became known as Paynes Creek, which it is still called to this day.

However, due to its location near a swamp, a breeding site for mosquitos, many of those stationed at the fort contracted and died of malaria. This became such a problem that the fort's doctor recommended the fort's closure. The army quickly agreed, and the fort was vacated on July 18, 1850, after less than nine months of occupancy, and a year and a day after Payne and Whidden's deaths.

Activities include canoeing, kayaking, fishing, geocaching, and bird and butterfly watching. Amenities include a number of historic sites, three picnic pavilions, and a museum at the visitor's center that recreates pioneer life.

Florida state parks are open between 8 am and sundown every day of the year (including holidays).

All content from Kiddle encyclopedia articles (including the article images and facts) can be freely used under Attribution-ShareAlike license, unless stated otherwise. Cite this article:
Paynes Creek Historic State Park Facts for Kids. Kiddle Encyclopedia.