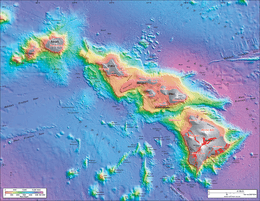 Bathymetry image of the Hawaiian Islands. The location of this volcano is the light red area immediately west of Moloka'i.

Penguin Bank is the name given to a now-submerged shield volcano of the Hawaiian Islands. Its coral-capped remains lie immediately west of the island of Molokaʻi, under relatively shallow water (see bathymetric map at the right).

The Penguin Bank volcano is part of the Hawaiian-Emperor seamount chain. It was one of the seven principal Cenozoic Era volcanoes that formerly constituted the prehistoric island of Maui Nui, along with West Molokaʻi, East Molokaʻi, Lānaʻi, West Maui, East Maui, and Kahoʻolawe. The date of the last eruption is unknown.

Plans to build wind turbines on Penguin Bank were called off in April 2009, because the site is located in the heart of the Hawaiian Islands Humpback Whale National Marine Sanctuary, requiring a lease from the then-active Minerals Management Service (MMS). However, the MMS would not issue leases within marine sanctuaries, effectively killing the project.

All content from Kiddle encyclopedia articles (including the article images and facts) can be freely used under Attribution-ShareAlike license, unless stated otherwise. Cite this article:
Penguin Bank Facts for Kids. Kiddle Encyclopedia.