Perry is a town in Washington County, Maine, United States, on the Canada–United States border. At the 2020 census, the town had a population of 802. 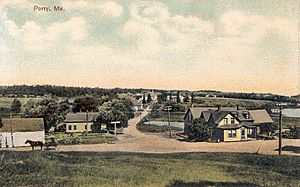 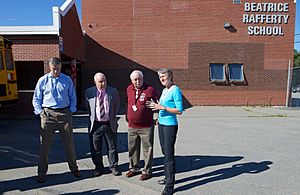 Once part of Plantation T1 TS, the area was settled in 1758 by John Frost, who built a trading post beside the St. Croix River. Situated on Passamaquoddy Bay, the town was incorporated on February 12, 1818, even as the British held Eastport 6 miles (10 km) away. It was named after Commodore Oliver Hazard Perry, hero of the War of 1812. Part of the community lies within the Pleasant Point Passamaquoddy Indian Reservation.

This climatic region is typified by large seasonal temperature differences, with warm to hot (and often humid) summers and cold (sometimes severely cold) winters. According to the Köppen Climate Classification system, Perry has a humid continental climate, abbreviated "Dfb" on climate maps.

There were 362 households, of which 30.1% had children under the age of 18 living with them, 57.2% were married couples living together, 6.4% had a female householder with no husband present, 6.4% had a male householder with no wife present, and 30.1% were non-families. 22.7% of all households were made up of individuals, and 6.4% had someone living alone who was 65 years of age or older. The average household size was 2.46 and the average family size was 2.89.

All content from Kiddle encyclopedia articles (including the article images and facts) can be freely used under Attribution-ShareAlike license, unless stated otherwise. Cite this article:
Perry, Maine Facts for Kids. Kiddle Encyclopedia.