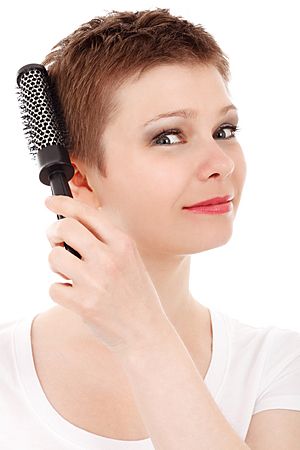 Personal grooming, also called titivating and preening, is the art of cleaning and grooming parts of the body.

Grooming in humans is usually done in the bathroom, for the hair. Things such as washing and cleaning the hair, combing it and taking out the tangles, and styling. It can also include shaving, done by a man to cut his beard short. However, sometimes the beard can be groomed as well, and washed and grown. 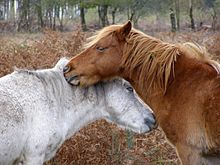 Animals usually clean their fur, feathers or other skin coverings. This is also a form of hygiene. Taking out other objects such as insects, leaves, dirt or twigs, are all forms of grooming. Among animals, birds spend a lot of time preening their feathers. They do this to remove ectoparasites, keep them in good condition, and waterproof them. Felidae cats are well known for their grooming, which they usually do by licking themselves. One of the reasons this is done is to remove all the scent on them so that they will not attract any predators. Cats groom so much that they often produce hairballs from the fur they accidentally swallow.

In humans, mutual grooming is done to become more close to each other emotionally.

All content from Kiddle encyclopedia articles (including the article images and facts) can be freely used under Attribution-ShareAlike license, unless stated otherwise. Cite this article:
Personal grooming Facts for Kids. Kiddle Encyclopedia.