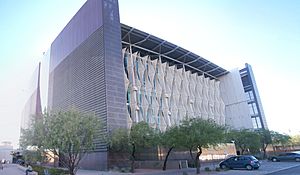 The Phoenix Public Library is a municipal library system serving Phoenix, Arizona, and operated by the city of Phoenix. There are 16 branches currently in operation citywide, anchored by the flagship Burton Barr Central Library on the northern edge of downtown Phoenix. Four of the 16 locations were designed by prominent local architect Will Bruder: the Burton Barr central library (opened May 1995), the Cholla branch location at Metrocenter Mall (opened 1977, enlarged and remodeled in 1990), the Mesquite branch at Paradise Valley Mall (opened November 1982, expanded May 1998), and the Agave branch in far northwest Phoenix (opened June 2009).

The library traces its origins to 1897 when a group of citizens decided to raise funds for a library. This group, the Friday Club, consisting of women of upper socioeconomic standing with the same interests of advancement, sought to establish and organize the first public library in Phoenix. By opening day, the library consisted of 1,500 titles. In 1904, industrialist Andrew Carnegie donated money for a library building on Washington Street near the state capital; this building is still in operation as a museum, archives and research center operated by the state of Arizona.

With the explosive growth of Phoenix after World War II, new branches were added citywide. A Central Library was opened in 1953 (replacing the Carnegie Library as Phoenix's main library location), but replaced by the aforementioned Burton Barr Central Library in 1995 (its building is now part of the Phoenix Art Museum).

All content from Kiddle encyclopedia articles (including the article images and facts) can be freely used under Attribution-ShareAlike license, unless stated otherwise. Cite this article:
Phoenix Public Library Facts for Kids. Kiddle Encyclopedia.