The Pikauba River is a tributary of Kenogami Lake, flowing in the province of Quebec in Canada, in the administrative regions of:

This river crosses the Laurentides Wildlife Reserve. The Pikauba River Valley is mainly accessible via the route 169 and the route 175 (connecting Quebec (city) and Chicoutimi). Other secondary forest roads have been developed in the area for forestry and recreational tourism activities.

The Pikauba River and Pikauba Lake have enjoyed a considerable reputation among hunters and fishermen since the end of the 19th century. Throughout the region, trout abounded and caribou hunting was once very popular.

The surface of the Pikauba River is usually frozen from late November to early April, however safe circulation on the ice is generally from mid-December to late March.

The Pikauba River is one of the most important rivers between Quebec (city) and Saguenay (city). Bordered by steep mountains, its narrow course is dotted with rapids and has several falls; it widens downstream, rich in the waters of its drainage basin which includes the Apica, Écorces, Pika and Petite Pikauba rivers. Increasingly tumultuous, it flows into the western part of Kenogami Lake.

The Pikauba River originates at the dike at the southeast mouth of Pikauba Lake which has another outlet, the Cyriac River; this other mouth is located at the bottom of a bay on the north shore. This lake is located in the central part of the Laurentides Wildlife Reserve. This lake has a length of 10.2 km (6.3 mi), a maximum width of 1.9 km (1.2 mi), an altitude is 827 m (2,713 ft) and an area of . This lake has a narrowing generating a strait of a hundred meters in width demarcating the northern part of the lake. The mouth of the south-east of the lake flowing into the Pikauba river is located at:

Intermediate course of the Pikauba river, downstream from the ruisseau Noir (segment of 39.6 km (24.6 mi))

Intermediate course of the Pikauba river, downstream of the Apica river (segment of 35.1 km (21.8 mi)) 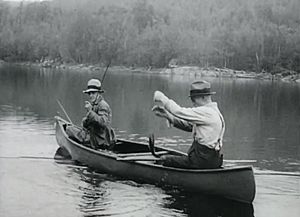 From the confluence of the Pikauba river with the Kenogami Lake, the current crosses this lake for 17.6 km (10.9 mi) towards the northeast until the dam of Portage-des-Roches, then follows the course of the Chicoutimi River on 26.2 km (16.3 mi) to the east, then the northeast and the course of the Saguenay River on 114.6 km (71.2 mi) eastwards to Tadoussac where it merges with the Saint Lawrence estuary.

The specific "Pikauba" designates two rivers and a lake in the "Laurentian wildlife reserve". Father Laure's 1731 map identifies this watercourse "Ouapikoupau river". According to Father Joseph-Étienne Guinard, in the Innu and Cree languages in particular, there is the "pikobaw" form that Father Laure translates from the Innu language as "tightened or masked by rushes". Another source claims rather that "pikobaw" breaks down into "pik", meaning "menu", "kobaw" meaning "scrub" and "wabi" meaning "white"; thus, this translation generates “white brush” or “small brush”.

In 1981, the Commission de toponymie du Québec adopted a change in the designation of this watercourse. Maps from 1900 to 1930 refer to the hydronyms "Grande Rivière Pikauba" and Petite Rivière Pikauba. The place names "Chicoutimi" and "Pikauba" officially replaced them in 1940. More recently, usage has confirmed that the part of the river south of Kenogami Lake is called "Pikauba river" and its tributary, that of “Petite rivière Pikauba”.

The toponym "Pikauba river" was formalized on January 8, 1981, at the Place Names Bank of the Commission de toponymie du Québec.

All content from Kiddle encyclopedia articles (including the article images and facts) can be freely used under Attribution-ShareAlike license, unless stated otherwise. Cite this article:
Pikauba River Facts for Kids. Kiddle Encyclopedia.