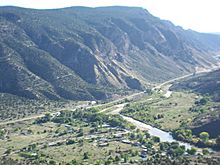 Pilar, seen from a nearby mountain. To the right is the Rio Grande; at the top of the "T" is the highway that connects Taos and Santa Fe. 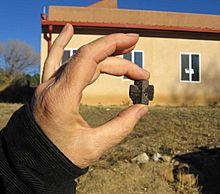 Pilar (formerly Cieneguilla) is a small unincorporated community in Taos County, New Mexico, United States. It is located on the Rio Grande.

The original name of Cieneguilla comes from the Spanish word "ciénaga" which means "marsh" or "marshy place". The swampy ground is caused by several streams running across a small flood plain formed by a bend in the Rio Grande. Because the area featured a flat plain with a constant source of water, it was long frequented by the Jicarilla Apache. The village's modern day name of Pilar has been reported to have come from an influential Native American male who lived in the area by the name of Pilar Vigil.

In 1694, the Spaniard Diego de Vargas burned the Apache village in the process of his re-conquest of New Mexico following the expulsion of the Spanish during the Pueblo Revolt of 1680.

In February 1793 the region was taken possession of by 20 persons who had received it as a land grant (Cieneguilla Grant) from the King of Spain Charles IV through his military governor in New Mexico, Don Fernando Chacón.

On March 30, 1854, the battle of Cieneguilla between the Jicarilla Apache fighters and the U.S. 1st Cavalry Regiment was fought in the hills several miles from the town.

All content from Kiddle encyclopedia articles (including the article images and facts) can be freely used under Attribution-ShareAlike license, unless stated otherwise. Cite this article:
Pilar, New Mexico Facts for Kids. Kiddle Encyclopedia.