The Pink-footed Goose (Anser brachyrhynchus) is a goose which breeds in eastern Greenland, Iceland and Svalbard. It is migratory. It winters in northwest Europe, especially Great Britain, the Netherlands, and western Denmark. 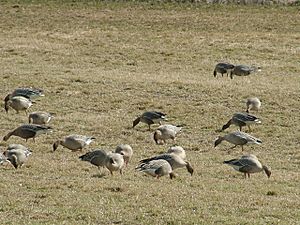 Part of a feeding flock in winter

Nesting is often on cliffs close to glaciers. This gives protection from mammalian predators (mainly Arctic Fox). Three to six eggs are laid in early to mid May in Iceland, late May in Svalbard. Incubation lasts 26–27 days. On hatching, the goslings go with the parents on foot to the nearest lake. They fledge after about 56 days. Southbound migration is from mid September to early October, and northbound from mid April to early May.

The diet is almost entirely vegetarian. In summer, they feed on a wide range of tundra plants, both on land and in water. In winter, they graze mostly on oilseed rape, sugar beet, potato, and various grasses. Damage to crops can be large.

All content from Kiddle encyclopedia articles (including the article images and facts) can be freely used under Attribution-ShareAlike license, unless stated otherwise. Cite this article:
Pink-footed Goose Facts for Kids. Kiddle Encyclopedia.