Pleasant Hill is a town in Cumberland County, Tennessee, United States. The population was 563 at the 2010 census.

Pleasant Hill was first settled by European Americans before 1819. In 1884 a teacher from the American Missionary Association (AMA) established the Pleasant Hill Academy to provide broad liberal arts education for rural youth, while also giving vocational training in agriculture and local skills. Supported by the Congregational Church, the school operated until 1947. Its main building, Pioneer Hall, is still standing. 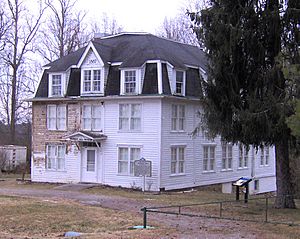 May Cravath Wharton, an early woman physician from Minnesota, established a medical clinic at the academy, where her husband was the director. Wharton also cared for people in the community. They invited her to stay after the death of her husband Edwin.

Wharton created a small hospital and, with successful fundraising in New England through the AMA, she was able to add a sanatorium annex for the care of people with tuberculosis. As no antibiotic was known at the time, rest and good nutrition were the only treatment. The Uplands Sanatorium was adapted as a retirement home when the hospital was relocated to Crossville, the county seat. The hospital is now known as the Cumberland Medical Center.

Camp Crossville, a site just east of Pleasant Hill, was used as a prisoner of war camp during World War II, housing German and Italian officers from November 1942 until the end of the war.

U.S. Route 70 passes through the southern portion of Pleasant Hill, connecting the town with Crossville to the east and Sparta to the west.

There were 273 households, out of which 11.0% had children under the age of 18 living with them, 46.2% were married couples living together, 5.5% had a female householder with no husband present, and 47.3% were non-families. 45.8% of all households were made up of individuals, and 40.7% had someone living alone who was 65 years of age or older. The average household size was 1.77 and the average family size was 2.40.

All content from Kiddle encyclopedia articles (including the article images and facts) can be freely used under Attribution-ShareAlike license, unless stated otherwise. Cite this article:
Pleasant Hill, Tennessee Facts for Kids. Kiddle Encyclopedia.